Atlantic City, (Tuesday, 6/6)
We ended Monday with the intent to get up early and head to Staten Island, NY via an off-shore passage in the Atlantic Ocean.  So at 5:30 am we untied the lines and headed out of Cape May inlet to fairly calm seas. It was very overcast and even though sunrise had occurred, the sky was dark and very ominous with rain certainly ahead of us. Despite passing several fishing boats who were coming back into the harbor, we pressed on because radar showing the rain substantially ahead of us, and the seas still pretty flat as expected.  As intended we cruised close to the shore and in the shortest most direct line north.

Within 45 minutes things started to get a little uncomfortable. First we hit fog, and for this we were grateful we had radar. But it didn’t last long because the wind kicked up, and with the wind brought the increase in waves. They were primarily on our bow and the interval frequency increased. Then things got a little choppy and we decided to head into safe harbor at the first opportunity we could – this was supposed to be the calm part of the trip and it was only supposed to get worse as we moved north.

Although there are numerous inlets along the New Jersey coastline, there are really only a few that are to be entered, especially under rough sea conditions.  The inlet near Atlantic City (Absecon Inlet) was the next acceptable one, and this was 20 miles away.  So we braced ourselves for a rough 60+ minutes until we could enter a protected harbor.

With every passing mile, Denise got calmer knowing we were heading into a safe harbor.  But when we crossed the other (non-transiting) inlets of Townsend and Little Egg Harbor the currents and an outgoing tide made things very rough.  And somewhere along the way, it started to rain. Atlantic City could not come soon enough.

Eventually we came to the Absecon Inlet and as if we were not sufficiently challenged, there was an incoming tug towing a dredge, and a second tug behind it.  At the same time, there was another dredge heading out of the inlet, making passing the slower tow a bit gnarly. As usual, Captain Mark did an awesome job of negotiating around them, while staying far enough off the jetty at the southern end of the entrance. 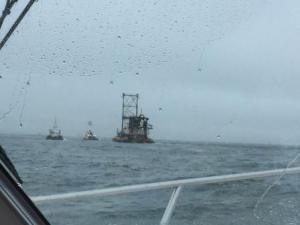 Finally in the harbor we attempted to contact the Farley State Marina (marina at the Golden Nugget Hotel & Casino) our targeted spot for the night.  However, the marina was not yet open – it was only 7:55 in the morning and they get in at 8:00 am.  We slowly came through the narrow entry into Clam Creek and remained in the harbor until we were able to contact the marina and secure a transient slip for the night.  Happily they had so much availability we could choose our slip and preferred side to tie to on E dock.  By 8:20 we were in our slip, secured the boat, and turned on the heat to dry out the boat and get warm. 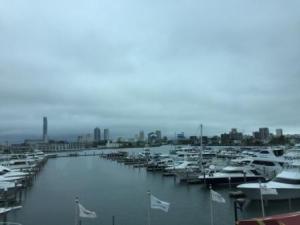 All day it was rainy, windy and miserable and we watched several boats come into the marina, most of which had come up from Cape May via the Atlantic Ocean. All of these boats were bigger than ours and all were covered in salt and had also been surprised by how fast things deteriorated today.

Eventually the rain stopped, but the wind and overcast skies kept us in the boat the rest of the day.  We used this opportunity to get some work done for clients, and to re-plan our trip to get to Staten Island.  We decided to leave tomorrow and go up the ICW to Manasquan, and then we will be forced to go out into the Atlantic Ocean for the remaining voyage up to Staten Island (about 30 miles). This is not Mark’s preferred way as the ICW is longer in miles due to the endless winding – not unlike the ICW in Georgia – and because it is really shallow in parts. It will require constant attention to prevent running aground.  However, if we can take it up to Manasquan, then Friday when the weather is supposed to be better, we can make the journey from Manasquan to Great Kills Yacht Club on Staten Island, and then on to Port Washington on Long Island by Sunday.

The Golden Nugget Hotel & Casino has several restaurants, including a Chart House that overlooks the marina. Tuesdays through Fridays in their bar area (only) they have a happy hour special on drinks and appetizers. So we decided to try it out and make it our “dinner”. It worked out great as we shared four separate appetizers, a couple of house drinks, and a great view of the marina and Atlantic City skyline. 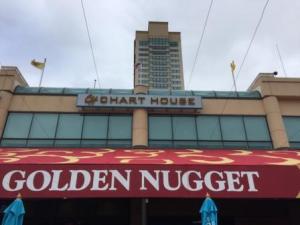 After dinner we walked over to the hotel and casino to see the place, and maybe try our luck at a little slots.  As soon as we walked into the non-smoking section of the casino we were hit with the awful smell of cigarette smoke.  It was so bad that we immediately turned around and went back out to the lobby area, and eventually back to the boat. We settled in for the night and watched another few episodes of “House of Cards” on Netflix until we could no longer stay awake.

Here are some pictures from the hotel and casino:

Atlantic City, (Wednesday, 6/7)
When we woke up this morning it was a cold 53° and very windy.  Denise attempted a run, but after 2 miles and 3 loops around the Golden Nugget and the surrounding properties, she quit.  There were just nowhere to run that was not on a highway or in an area she felt safe.

Before breakfast we had talked to our dock neighbors about the weather and plans to move north, and like them, we decided that we too would sit tight another day. It would be a big risk to travel the narrow ICW in with the high winds where we could easily be blown out of the channel and run aground. Plus, it was better to stay here one more day, then move to Manasquan and sit there for two days; this marina had more to offer. So, Mark got on the phone and rescheduled our reservations for the upcoming days and extended one more day here in Atlantic City.

During our two days here, we also made plans for Denise’s sister Claire to come visit us while on Long Island.  Mark has to go to NC next week to see a client and this will give Denise some company. Then she can cruise with us to a few spots on Long Island, not unlike when we were on the Michigan coast during our Great Loop adventure.

We also spent the better part of the day formulating our trip itinerary for the days after Port Washington on Long Island.  Our primary concern was getting to Portland where we can leave the boat for the week we will be at the family reunion. Secondarily, we wanted to make sure we have time to get to Rockland, Maine (birthplace of our Island Office).  Even allowing for weather days, we do have time to do this and will also be able to spend some time in the Portsmouth – Kittery, Maine area and visit with Denise’s Aunt Judy. We cannot wait as we have visited this area many times and will be thrilled to now see it from the water.

Our biggest concern cruising this part of the east coast (in addition to weather, fog and rocks) is the exorbitant amount of money they charge for overnight accommodations. Marinas are anywhere from $3 per foot + $15-$30 per day for electricity (highway robbery) and mooring balls can be as much as $60 per night.  Normally we would just plan on anchoring out, but in many areas of Long Island this option is very limited, and it is 100% dependent on good weather.  Boy do we miss some of the marinas on the Western Rivers where they only charged 50 cents per foot and no charge for electricity!

As weather would have it, by mid-afternoon the winds had died down and the sun came out. It ended up being a very pretty day.  We got to talk with some of the boats that were still in the marina, including the crew and eventually the owners on “Magic Days”.  This was a boat Denise saw in Solomons, MD, then we saw it again in Cape May. Now they were on side-tied on the dock behind our boat.

It was not the only large yacht on the transient docks: there were two large Viking sport-fishers who were heading down to NC for the marlin tournament; a Hatteras cruiser from Ocean Reef; and a few other cruisers, including “Pegasus” who was at Zahniser’s in Solomon’s.  Here are some of the boats: 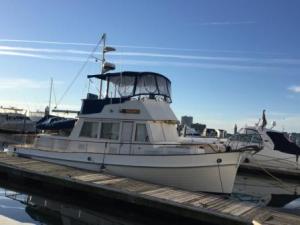 Soon it was time for dinner and we opted to eat on board the boat.  Together we cooked some delicious fajitas and finalized our plans for moving to Staten Island on Friday, including stopping along the way to top off our fuel tanks before entering New York.  We watched another few episodes of “House of Cards” and wrote this blog before calling it a night.

Tomorrow we will move the boat from Atlantic City to Manasquan and then Friday cruise the 30+ miles to Great Kills Yacht Club on Staten Island.

Here are some more pictures of the area around the marina and the Golden Nugget:

Golden Nugget lit up at night