Manchester By The Sea (Saturday, 9/2)
Because we had a long passage planned for today, Denise got up early and managed a 3.5 mile run as the sun was coming up over Potts Harbor.  Of course we had to wait to get one last round of coffee and blueberry muffins before we untied the dock lines and said goodbye to the Dolphin marina and Potts Harbor. We really like this area and hope to be able to come back to it someday.

Our route took us past the west side of Eagle Island and Little Mark Island Monument, then out through the channel to Casco Bay Inlet. 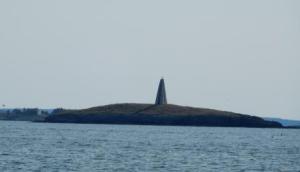 From there it was a pretty straight shot around Cape Elizabeth (Portland) and the two lighthouses, down the Maine coast and to Cape Ann Light, just off the coast of Gloucester, Mass. We had left Maine and at one point we were so far off the coast we could only see the outline of the Isle of Shoals to our right and none of the remaining Maine coastline.  It was a pretty calm day and the seas were small enough that the boat handled well with the autopilot doing its thing.  There were still plenty of lobster pots to watch for, but not near the density of other parts of Maine.

Eventually, land came back into sight and we rounded the corner at Cape Ann Light.  We headed west and dodged the numerous boats that were enjoying a nice day on the water, many of them sailboats.  We passed by the Eastern Point Lighthouse near Gloucester and continued on until Manchester Bay. 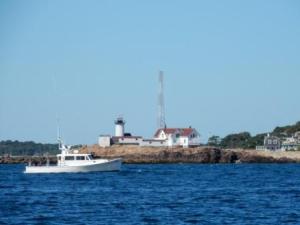 We really wanted to stay in Gloucester but the schooner festival was being held this weekend and there was no room on moorings or marinas.  Our next choice was the small community of Manchester-by-the-sea (Manchester), now made famous by the movie of the same name.  We had reservations for a mooring ball at the Manchester Yacht Club (MYC) for the night.

Finally, at 3:00 we pulled into the float at MYC to rinse the salt off the boat and to wait for our mooring assignment. 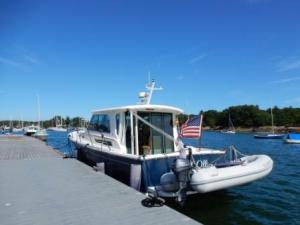 We were hopeful that they would give us a mooring ball near their club as the outer harbor was already pretty rough and the weather (mostly high winds) was going to get worse in the next 24 hours.  Fortunately, they put us near the club on a mooring otherwise assigned to a vacant member. Although it was really tight and we had to pull the line in close, it was great protection and we were happy. 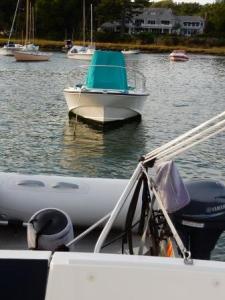 Mooring too close for comfort

Once tied up we had the launch take us back to the club so we could check out the place.

They do not have any restaurant at this yacht club, so we would need to find someplace else to eat. Furthermore, the club is not close to town, but the launch service will take you to the town docks.  So we went back to the boat and got showers, and then we called the launch back to take us into town. 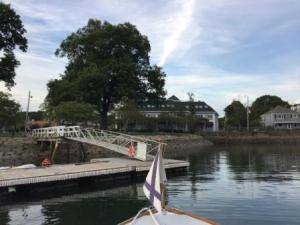 Once in downtown we immediately went to dinner. It was getting late and there were not a lot of choices, so we opted for hamburgers at Cala’s Restaurant.  They were very good and hit the spot after a long day on the water.

We then walked all around town to take in some of the sights of this very quaint and cute place. Almost all the shops were all closed, but that didn’t stop us from window shopping. 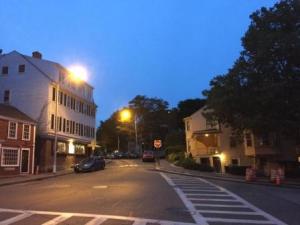 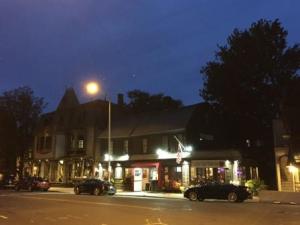 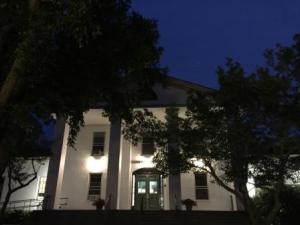 We did notice that Crosby’s Market (local grocery store chain) was still open, so we decided to pop in and get a few things.

From there we walked back towards the town dock where we would pick up the launch.   However we decided we first wanted to get an ice cream from Captain Dusty’s.  This is a local place that was named after a black man who started a lobster shack in its very place.  Although he has since passed away, “Captain Dusty” was a Pullman porter for a local millionaire who came from South Carolina to the all-white enclave just before the depression hit.  When his boss died and the depression hit he found himself learning to fish to keep food on the table. Eventually, he started the lobster shack and he and his wife became huge supporters of the kids in the community; they had no children of their own.  This ice cream shop is now a landmark in town and despite being in a residential neighborhood, the town fights to allow it to stay in business.  It kind of helps that they have pretty good ice cream too!

We called for the MYC launch and awaited his arrival, while shivering in the wind.  Finally he came and picked us up to take us back to our Island Office.  Once back on board, we streamed the movie “Manchester by the Sea” as neither of us had seen it and we wanted to see what they put in the movie. Definitely some of the houses that overlook the harbor were in the opening scenes, as was the Town Hall and other buildings.

Here are some other pictures we took during our short stay here: 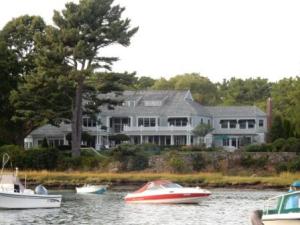 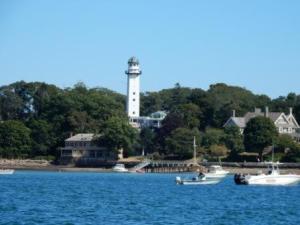 One of the other reasons we had chosen this town was to be able to go to mass on Saturday evening. However, once we arrived we learned that the Saturday mass on this holiday weekend was not available at this church, and the only Sunday mass was too late. We would have to go to one of the other sister churches in the parish which included the towns of Beverly and Salem. So, we now had to rethink our time for going to Salem tomorrow, arriving in time for their 9:00 a.m. mass.  That meant an early departure for the 6 miles across the Salem Sound. Since the wind was going to pick up during the day, this fit with our plans to leave early anyway.

Salem, MA (Sunday, 9/3)
As predicted the wind picked up during the night and it was already blowing by morning.  We got underway before 8:00 a.m. and headed out onto Salem Sound with a good 3 foot chop on the bow.  This was even after being behind the protection of a few barrier islands that acted as buffers from the strong south wind and waves.  This was tolerable because we knew it was a short 6.5 mile cruise up to Salem and Brewer’s Hawthorne Marina where we had reservations.  Although rain was in the forecast, we did not encounter any which also helped make the trip easier. 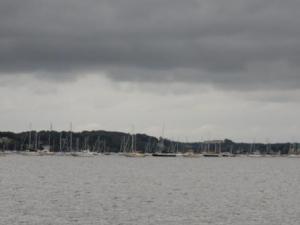 We pulled into the Salem Harbor, quickly secured the boat and told the dockmaster we would be back to check in; we had 10 minutes to get to mass in time and we still had quite a hike.  We quickly walked down the streets past the National Park Maritime Center and several historic buildings and up to Immaculate Conception Catholic Church.  If we were thinking, we would have taken an umbrella, but since it was not yet raining we didn’t think of it.  We did however make it just in time for the opening prayers and easily found seats in the back of a semi-filled church. 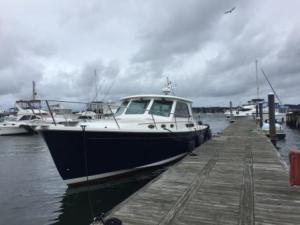 When mass was over we exited to find it had started sprinkling and it continued to get us wet all the way back to the marina.  Once on property we went upstairs to the cruisers lounge where the dockmaster had muffins, donuts and coffee that were very well received.  It started to rain more and the wind was really blowing now.  We looked out on our boat that was side-tied to an inside slip along the long dock and we could see it was bouncing like crazy.  It was not going to be a good day to go sightseeing and staying on the boat didn’t look like too much fun either. It was like a flashback to the days we spent in Grand Haven, MI when doing the Loop.    We stayed up in the cruiser’s lounge for a bit but decided to go back to the boat and figure out what we would do for the rest of the day. 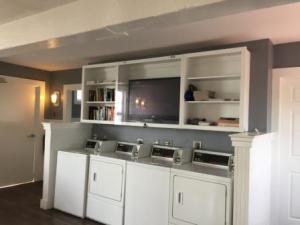 We started with the idea that we could just take our computers back to the cruisers lounge and work from there; Mark had work to do for clients and Denise wanted to get the blog update posted.  That morphed into us going to the movies; this would require us to get an Uber as the theater was not close to the marina.  Finally we settled on getting a hotel room for the night, with Mark using some “Hilton Honors” points to get us into a Doubletree hotel in Danvers. Of course this would still require an Uber ride, but we were willing to do this and get off the boat that was now making Denise seasick.

After packing a quick bag and securing our ride, we made our way to the hotel only to find that there were no rooms yet available for check in. It was just after noon and they were still cleaning rooms.  Since we had not had lunch we went to the bar area in the hotel and got something to eat while waiting for a room.  We did not have to wait long before one became available so we checked in and got to our room and broke out the computers to get our work done.  Outside it was pouring raining and the wind was really blowing. We were happy to be high and dry and out of that mess.

We also used this time to plan our week ahead before flying home.  Irma was now skirting Puerto Rico and forecasted to hit south Florida, but its future path was anybody’s guess. We started considering what to do should the storm head this way and where we could take our boat. We also saw that the weather in our area now was iffy, with one really good day to go the 20 miles into Boston where we would be leaving the boat while we were gone.  Considering this, we decided to leave Salem after only one day and head to Constitution Marina a day earlier than planned.  We called the marina and confirmed they could take us, so we planned to leave tomorrow but not too early; the seas would lie down in early afternoon and we would stay in the marina as late as possible.

Because of his lifetime Diamond status with Hilton, we were given access to the concierge lounge where they had hot hors d’oeuvres.  Since we had a big lunch this was all we needed for dinner and allowed us to stay in the hotel for the entire day.  It actually ended up being quite relaxing, but meant we did not get to explore and see Salem as we had originally intended.

Here are some pictures of the sights near the marina or on the way to church that we did get to see: 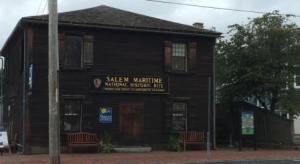 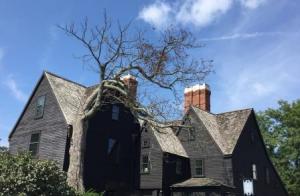 House of 7 Gables – next door to marina 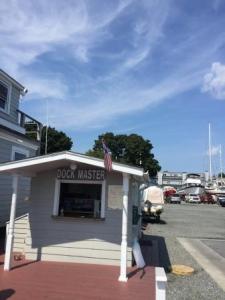