Beat-up on the Bay!

Buzzards Point Marina – Reedville, VA (Wednesday 10/11)
Some days on the water are awesome and so spectacular that we have to pinch ourselves to realize we have been fortunate enough to experience God’s great glory. This was NOT one of those days.  In fact, it was more like facing the fury of the devil.

We left St. Mary’s very early as the seas and weather were supposed to be deteriorating as the day went on where we were, but the further south we got they were forecasted to be flat.  Additionally, we expected overcast skies and a 1’ -2’ chop.  We also knew that where the Potomac meets the Chesapeake Bay the counter currents and tides can create a lot of turbulence.  When we left the St. Mary’s River and entered the Potomac, the waves were 1’ as expected and we settled in for a slight bumpy, but tolerable day of cruising.  We were headed to the Poquoson area off the York River; a 75 mile run.

As we approached the mouth of the Potomac, things got bumpier and the northeast wind mixed with the outgoing tide for a washing machine effect. The wind had started to pick up and before long we were rocking like crazy.  The waves quickly built to 3’- 4’ and we had to slow the boat down first to 12 knots, then to 8 knots.  We knew once we rounded the point and headed more towards the south we would get out of the Potomac churn and it would settle down.  But first we would get hit by several big waves and the boat slammed and rolled, resulting in dishes coming out of their cabinet and smashing on the floor of the galley.  In our stateroom several items flew off the top of the cabinets and in the head (bathroom) all our cosmetics ended up on the floor, shattering Denise’s makeup and spilling it everywhere. The place was a mess.

We decided it was too rough to stay on the Bay and made plans to turn into the first place we could escape into, the Great Wicomico River.  Unfortunately, it was still a few miles away and we had to endure the turbulence.  Mark had also noticed at this point that the dinghy had been rocked so much that it suffered some damage.  We were not going to be able to use it until we could get it repaired, which limited our anchoring options a bit.

In the meantime it had gotten hot and we tried to turn on the generator to get the air conditioning going. However, it was acting up and giving us an error message on the display panel that usually means an impeller needs to be replaced. We have seen this before (Sarasota in 2016) and is often caused by a lack of use of the generator.  Since we have not been anchoring and using the generator much these last few weeks, it is not unexpected.  It is definitely something Mark can fix, but not something we could due until we got to a dock with stable weather.

While trying to keep her sanity during this, Denise searched for a marina for the night.  Seeing there were several on the north side of the river, we turned right and headed up the Cockrell Creek Inlet. Slowly we made our way past the seafood processing center and towards the town of Reedville.

Our initial call was to the Reedville Marina, but it didn’t have great reviews on Active Captain and clearly we could see it was quite exposed to the wind.  We decided to continue up the creek to Buzzard’s Point Marina even though we had tried to call them, but got no answer or call back on our voice message.

Shortly after we entered the creek and headed towards Reedville, we passed a sailboat that was heading out to the inlet and the Bay. “Dee Gee V” hailed us on the radio and asked us about the conditions on the Bay, and we gave them our report.  They decided to turn back and followed us up the creek towards Buzzard’s Point.  Once we arrived they gave us instructions about taking the side-tie pier as they were on it the day before, and they would take an empty slip. They told us there is plenty of space and things are quite informal at this marina during this time of year.

We tied up as instructed and communicated with family as to our whereabouts.  It had taken us 4 hours to only go 35 miles; something that normally would take less than 2 hours.  We both went to work to pick up the mess on our boat.  We had lost 4 plates and some makeup, but everything else just had to be organized, wiped down and stowed again. It literally took us all afternoon to clean and put things back together again.  Note to file:  Corelle® dishes do not mean they don’t break. In fact, when they do break they shatter in millions of tiny pieces that can only be picked up by a vacuum.

Mark did finally talk with a “dockmaster” and got the ok to stay as many nights as needed as the weather for the next few days did not look great.  And we were not up for more pounding on our “tiny house on the water”.  We also got the WiFi password, but had difficulty connecting to it, as was documented by one reviewer in Active Captain for this marina.  This meant no email, no work and no streaming of news or movies this evening.  The dockmaster had also offered use of a truck should we want to go to one of the restaurants in the area; the only one open this evening.

Once we were done with the cleanup and got our showers, we made a couple strong adult beverages and celebrated getting through the challenges of the day. In all of the “excitement” this morning, we had failed to notice that we crossed the state line and were now in the commonwealth of Virginia.

We also did some research about other marinas in the area.  We could not stay here for several days with no internet and one-bar cell signal strength on our phones.  We found a small marina located across the Great Wicomico River inlet that had a good AC review so Mark called for availability.  He got confirmation that they had room and we could go there tomorrow as early as possible. We had identified that leaving around 9:00 would give us the best weather opportunity to go the 5 miles across the inlet to Ingram Bay Marina without getting beat up too badly.

In the evening we ate leftovers from the freezer for dinner, even though the couple on “Dee Gee V” were using the loaner car to go to the one restaurant and offered us to join them.  We were tired and didn’t want to venture out in the miserable weather.

In retrospect, we probably should have bypassed St. Mary’s yesterday and continue on to Poquoson where we were planning on staying for a while anyway. The weather was good for a very long passage and we certainly could have done the distance (or most of it) in one day. However, we had already missed this place two other times and we really wanted to go. Hindsight is always 20/20!

Although we had too much going on to take pictures while on the Bay, here are some from the Buzzard’s Point Marina: 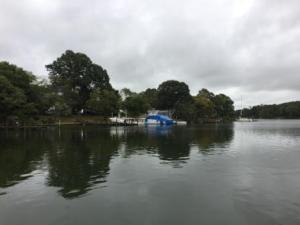 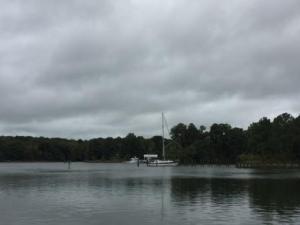 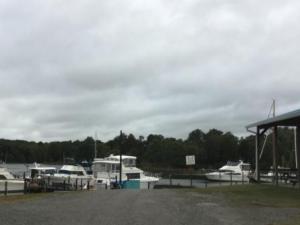