Posted on October 13, 2017 | Comments Off on Merriment in Maryland!

Atlantic City, NJ to Rock Hall, MD (Monday, 10/2)
Knowing we wanted to get as far as possible today, we left the dock at Kammerman’s Marina at 7:10 am and headed out the Absecon Inlet and said good bye to Atlantic City.  The waves were maybe 2’ and were a little choppy, but there was not a lot of wind so the ride was pretty comfortable.  It was a 20-mile run down to Cape May, and it took us about 90 minutes to get past the breakwater and into the harbor.  It was a little different to be coming into this harbor from the Atlantic Ocean instead of leaving it to head north, like we had done twice before. 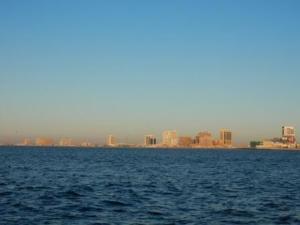 Once inside the harbor we went to Utsch’s Marina where we needed to fill up with diesel.  They have an affordable price and being that it was early in the day there was no wait on their fuel dock.  It only took us about 30 minutes, and by 10:00 we were on our way through the Cape May Canal and heading towards the Delaware Bay.  This canal is 6 miles long, but took us 35 minutes as it is a no-wake zone the whole way.  There were very few boats on the water and it was really quiet except for the ferry at the end of the canal; this was a testament that the summer was done and boats were being put up for the winter here too. 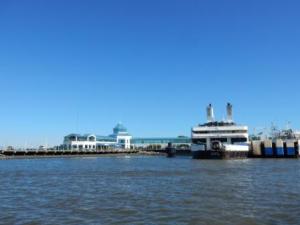 We entered the Delaware Bay and cruised on very flat water all the way up the Delaware River. We had never seen it this calm and it was so clear you could see parts of the low-lying Delaware shoreline from 10 miles out.   This was a rare day on this large body of water, and we were going to take advantage of it.  We quickly decided to not stop in Delaware City, but to press on through the C&D Canal to the Chesapeake. 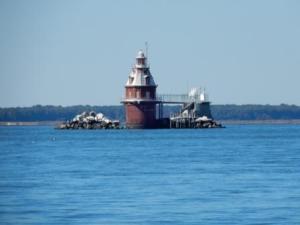 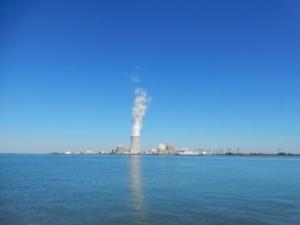 As we went under the Chesapeake City Bridge on the C&D Canal, we decided we could make it all the way to Rock Hall by 4:30 and called the Rock Hall Landing Marina for a reservation. We had stopped at this location on our way north in June and knew what it had to offer, including a great area for Denise to get in a run.  So, once again we bypassed Chesapeake City where so many cruisers stay.

After exiting the C&D Canal and starting our way south on the Chesapeake, we encountered first a Coast Guard vessel, then two car-carrying ships that are so huge you can see them for miles. They look like buildings on the water. 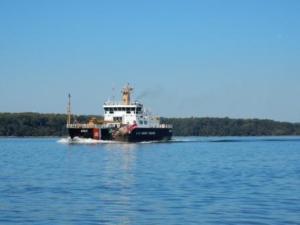 There were a few other pleasure craft on the water, especially as we headed further south and got closer to the Patapsco River (near Baltimore).  It was here that we saw a Fleming Yacht cross in front of us, only to discover that it was “Ravello” and our friends Mark & Janay Paul (brother to Denise’s high school classmate Jim Paul).  We met them in Solomons, MD in the spring and they keep their boat just outside of Annapolis.  Denise spoke with them for a little while on the phone, but our different cruising schedules have us missing each other so we will have to connect with them at a later time.

At 4:15 we pulled into the Rock Hall Landing Marina and were assisted by Joe, one of the marina owners, who placed us on an end-tie.  This makes for easier docking and undocking which we like.  We had traveled 141 miles – our second longest day this summer, and we could not have asked for a better day on the water. We had absolute perfect conditions and it had been fun, but we were tired.

We settled the boat, checked in at the marina office, and went back to the boat for a well-deserved adult beverage.  Not wanting to cook and now very tired, we decided to go Waterman’s Crab House for dinner.  This restaurant is right next to the marina and we ate there the last time we were here. It is usually a happening place, with a live band every Friday and Saturday in the summer.  We got seated right away and the place was very empty, despite great weather.  Mark ordered shrimp and Denise ordered steamed crabs, trying to capture one last bite before the end of the season.  They were good, but a lot of work.  Next time she will order the soft-shell sandwich instead.  The best part of this place is the million-dollar view and we got our money’s worth with this spectacular sunset tonight. 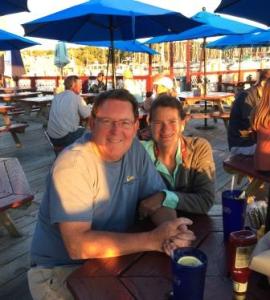 Sunset over the Chesapeake

After dinner we walked back to our boat noticing that even though there were a lot of boats in the marina, the place was pretty quiet. Again very different compared to how it was when we were here last.

We were trying to decide where to go from here next. Although we had talked about going to Annapolis (or more preferably Eastport to its south), the annual boat show is scheduled to start with the sail expo on Wednesday and we were not having any luck finding a marina.  We decided to bypass Annapolis and stick to the eastern shore for now, eventually heading to Solomons.

It didn’t take long for Denise to crash and Mark too, but not before watching another episode of “Narco”.

Rock Hall, MD (Tuesday, 10/3)
Our bodies must have been fatigued as we were slow to get going with our day.  We had discussed and decided to stay a second day so that we could take some time to plan our itinerary for the coming days and weeks.  We also had several boat projects that needed to be done and this would give us the opportunity to get them done.

But first we decided that exercise was in order.  Mark used the loaner bike from the marina and rode along as Denise ran 4+ miles.  We took the same route that Denise took before, but we got a little lost and it ended up being a little longer than planned.  But it was good in that Mark got to see the downtown and other parts of the area he had previously missed.

Mark following on the bike 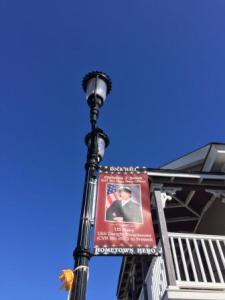 We spent the rest of the morning planning our desired stops over the next two weeks, and communicating with friends and family with whom we were trying to see along the way.  This included changing our routes so we can see our Looper friends Betsy & Dave (“Frye daze”) whom we missed the last time we were in Solomons. We also made reservations for marinas in Oxford and Solomons as these are popular spots and we want to make sure they have space. We are now competing with northern boats heading south for the winter.

After lunch Mark hosed off the boat to get off most of the salt, and then worked to install the new LED navigation lights we got from Back Cove when in Rockland.  Mark had also met a few local cruisers on their Nordic Tug (“Compass Rose”) who had come into the marina.  He talked to them about our Loop adventure as they are planning to do it in 2018.

Meanwhile, Denise got a loaner bike from the marina office and rode to the grocery store, hoping to pick up some milk and a few other items.  The downtown was eerily quiet with most shops closed until Friday.  Clearly the season has wrapped up, except for the locals who are still coming here on the weekends, at least for a few more weeks.

When Denise came back from the store, Mark was finishing up the installation of one of the lights; the second would have to wait for another day.  After stowing the groceries Denise worked a bit on the blog and then we prepared for happy hour.  While sitting around with drinks in hand, we made the decision to stay a third night, which should give us a whole day on Wednesday to finish up a few boat projects and to get the blog updated.  This was an option because the marina had a special; buy-two, get a third night free.  The marinas in Maine, NH and Massachusetts could take hints from the marinas in the Chesapeake!

While at the grocery store Denise had picked up a rotisserie chicken and then paired it with a salad and some rice for a pretty easy and good dinner aboard our Island Office. We ate this while being graced with another awesome sunset over the western shore of the Chesapeake Bay.

For our entertainment this evening we watched the movie “Founder”; a movie about Ray Kroc and the story behind the growth of McDonald’s. Michael Keaton played Kroc who is portrayed as a ruthless business man but is responsible for this food chain’s immense growth and prosperity.

Rock Hall, MD (Wednesday, 10/4)
Another cool morning meant another night with the heat on.  We have now done this for at least the last week or so and we are loving it, especially since it warms up to 75° or 80° during the day.  We feel for family and friends who are still suffering with the heat in Central Florida.

Because we had a few items to put in the mail, and because she wanted to get in some exercise, Denise walked to town (1/2 mile) and the post office and back.  During this time Mark replaced the second LED navigation light and now we have brighter lights for when we hit the Chesapeake fog; hopefully will not need them.

For the rest of the day we did office work on the boat. We stopped long enough for lunch and for some short walks around the marina. The wind had picked up a little bit and we could see some of the waves in the bay, but all of it was tolerable.

Besides Waterman’s Crab House, the only other restaurants within walking distance were closed and only open Thursday through Sunday this time of year. So, we opted for a dinner of leftovers onboard. After dinner we were once again treated to an awesome sunset.

We closed the evening watching Netflix and the Discovery Channel’s series called “Manhunt: Unabomber” – a story about the hunt for Ted Kaczynski (aka the “Unabomber”). It is an 8-part series that ran this summer and stars Sam Worthington and Chris Noth. It’s a fascinating story and was very well done.