Posted on April 11, 2019 | Comments Off on Adventuring in Amelia Island!

Despite last night’s thunderstorms during dinner time, the weather settled down in the evening and we had a calm night at the anchorage.  Slowly we are moving into boat life where we go to bed early (not too long after sundown) and wake up early…well at least Denise does. But this morning it was actually late for Denise as she got up around 5:30 and waited patiently until 7:00 to power up the generator so it wouldn’t wake up mark.  However, Mark had just woken up, so the timing was great and she was able to get a pot of coffee brewing. With the generator going, we plugged in all the electronics for a good charge before setting out for the day’s journey.

Pine Island Anchorage in the morning

Shortly after 8:00 am we pulled up the anchor and headed north up the ICW towards Amelia Island.  It was mostly uneventful as there were a few boats; mostly northbound sailors and a few local fishing boats.  We cruised through Palm Valley and Ponte Vedra where we witnessed more new docks and homes being created or repaired.  So for a few miles we had to do the “speed up-slow down” routine, but most of the time we were able to go 20 knots.  It helped that we had an outgoing current in our favor so our speed was actually 21 – 22 knots. 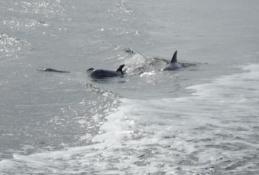 Dolphins in our wake

Here Mark navigated safely through the winding and twisting part of this waterway, happy to see it had recently been dredged and we had good water depth beneath us.  This area is notorious for shoaling and we were grateful for the easy passage as it has not always been that way in the past.

Just a short time later we had made our way to the southern part of Amelia Island and entered the canal up to the Amelia Island Marina.  This marina is just off the ICW and is well protected.  More importantly, it is open and available.  Since the hurricanes Matthew (2017) and Irma (2018) impacted this area, the Fernandina Beach Municipal Marina has not been operational so we had no plans to stop here initially. However with the impending weather, we did not want to stay at anchorage at Cumberland Island, and we did not want to cross the St. Mary’s inlet in high winds. So, this was a compromise stop and offered us a chance to work, get to see Fernandina Beach (with marina courtesy car), and be comfortable.

After we tied up to the dock we went to the office to check in and reserve the courtesy car. Just as we left the boat a small squall came through dumping rain and winds, but twenty minutes later when we walked back to the boat the sun had come out.  Ah Florida weather! 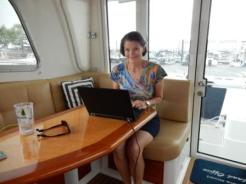 Denise at work on Island Office

We ate lunch on board and in the afternoon we set out to do some work. After a while Mark went for a walk around the marina and shortly thereafter texted Denise that “Lady Catherine” was coming up the canal and entering the marina.  “Lady Catherine” is a boat we saw several times during our Maine 2017 adventure and we saw again in Ft. Myers in February 2018.  You can read more about our posting and frequent encounters here. 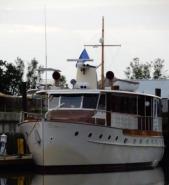 As luck would have it, we were able to secure the marina courtesy car for the evening and go to one of our favorite spots in Fernandina Beach, Timoti’s Seafood Shak. We discovered this place by accident in 2014 when we were moving our then newly-purchased Island Office from Charleston to Merritt Island. It’s a very casual family-oriented walk-up restaurant that serves fresh seafood in many different ways. Denise got a “Timoti’s Box” with flounder, and Mark got a salmon Cesar salad; both were delicious! 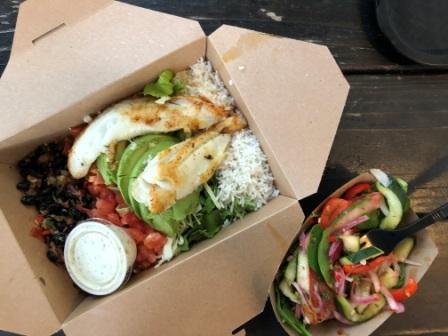 We were able to secure a table outside under the metal roof, but had to move to another table once a large squall with pouring rain came through. When it finally stopped we were able to get back to the car without getting wet, and drove around downtown Fernandina.  We were pleased to see that they were working hard at dredging the area and restoring the city marina where we usually stay when stopping here. Perhaps it will be completed when we return in the fall.

Since we had the courtesy car we decided to visit the local Wal-Mart and Publix which were near each other and on the way back to the marina.  We picked up a few fresh items and it was then that we discovered most of the island was out of power. We got back to the marina and found we also had no power on the dock and had to revert to battery power to keep the fridge and freezer going.  Fortunately, the outage didn’t last long and we were not forced to use the generator.

Amelia Island, FL (Wednesday 4/10). This morning it was a bit warm and muggy, but that didn’t stop Denise from trying to get in a run.  However, the marina is right off the highway (A1A) at the southern end of Amelia Island and there is no really good place to run.  A few laps around the parking lot as well as an up and down the gravel road on the property adjacent to the marina and she was done.  For this marathoner, the 2.5 miles was more like a warm-up, but it would have to do.

The rest of the day was a work day for us. Despite the original threat of bad weather, it ended up being a beautiful day.  However, we both had conference calls and work to do for our clients, so we stayed on or close to the boat the entire day.  In the afternoon Denise spoke with a local fisherman who had come in with his charter and said it had been so windy they didn’t go out very far; we were grateful we decided to stick to the marina and not swing around on an anchor all day.

We also got to see three “Looper” boats come into the marina.  In the evening we went visiting Marie and Fred on “Compass Rose”, one of the boats that arrived.  Hailing from Maryland, they are almost done completing their Great Loop adventure.  We were later joined by their friends Bob & Linda on “Corkscrew”, whom they had been traveling with since the inland rivers.  They are from Vermont on Lake Champlain, where we are headed.  Unfortunately, we did not have a lot of time to talk with them as it was getting late and time for dinner. We bid our hosts good bye and offered to reconnect in Jekyll Island, where we are all planning to go to tomorrow. We went back to our boat, ate dinner, and then decided to walk around the south end of the marina to catch this spectacular sunset.

Sunset over AIM canal to ICW

Before daylight was done, we walked to the north end of the marina to meet the third Looper boat, “Esther Girl”.  Here we met Pat and Edith Mason from Beaufort North Carolina.  They technically have “crossed their wake” already as they have done the NC to Key West route several times. However, this time it is at the end of their 2 year adventure. As the sky was getting darker, the no-see-ums were out in full-force so we returned to our boat for the evening. 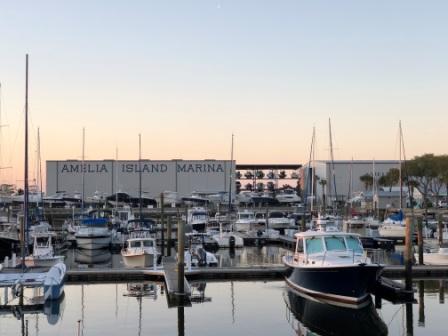 Tomorrow (Thursday) we will wait for high tide and the wind to die down a bit before heading out to Jekyll Island.