Mobjack Bay, VA (Monday 5/13):
At some point in our crazy lives we all want a day where we do nothing but sit around and read, watch tv or movies, and don’t do much of anything.  No phone calls, work, errands, carting people places, no going anywhere or talking to anyone else (mostly). Today was THAT day for us.  The anchorage area (“Put In Creek” – up the East River off Mobjack Bay) has a few sparsely dispersed houses lining both sides of it.  We only saw lights and activity in one of the houses last night, and given the rain and overcast skies we saw no stars.  But there was lots of birds (blue herons and osprey) and some jumping fish to keep us amused.

Drizzly morning at Put In Creek

In the early morning one boat of watermen (term used for fisherman of all types on the Chesapeake) came to check on their crab pots.  Later in the day, another would come by and set out a new pot right near our boat.  Pulling up the anchor and not hitting it is going to be fun! 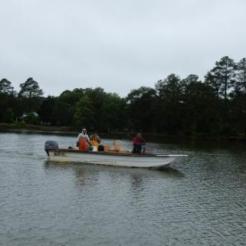 As soon as we got up we put on the generator to power the coffee pot, computers, phones, tablets and the heat. Yes, it was in the low 60’s and it was cold on the boat.  We kept it on for a few hours; enough time to warm up the place and prepare a hot breakfast.

After 8:00, Mark called Zimmerman Marine to advise that we were in the Mobjack Bay area, and to see the status of availability for the Cummins mechanic.  Although we had a firm appointment for Wednesday, they had previously told us to call and they would let us know if they could take us earlier. We were told that there was a slight chance they would have an opening on their docks during the day, and that the mechanic may be able to take us.  Based on this, and the fact that it rained off and on all morning, we did not venture out on the dinghy.  We wanted to explore up the creek a few miles to the nearby town of Matthews, but we were not up for getting caught in a downpour.  We also figured that with the weather, no one on the dock would be leaving anytime soon. Most likely we were stuck at the anchorage for another night, but it was not a bad place to be stuck at all.

And so that is how we got the “do nothing” day. We hung out doing a little reading, emails, a few minor boat chores, brief conversations with family, and napping.

Soon it was time to start preparing dinner and that meant turning on the generator to power the stove and oven.  And by this time we again needed to charge computers, cell phones, camera, tablets, etc. again.  Denise made enchiladas and Mark made drinks, and we had a peaceful dinner.  The rain had stopped, the sun actually came out, and the anchorage was as calm as can be.  We got to witness a beautiful sunset over the tops of the trees and then went back to reading until bedtime. 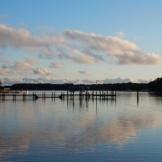 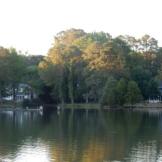 Here are some pictures of the surrounding houses:

House with no activity – Put In Creek Anchorage

Only house with activity

Mobjack Bay, VA (Tuesday, 5/14):
Every day the sun is setting later and rising earlier and with it comes the chirping birds.  Denise’s natural body clock is set to get up with the chirping birds and so she was up with the first hint of daylight.  It had rained during the night and it got colder, but with long pants and a fleece jacket Denise was comfortable and didn’t want to disturb Mark’s sleeping by running the generator. Instead she went outside and took some pictures.

When she came back inside Mark was awake and insisted on putting on the generator to heat up the place; it was 64° inside and 54° outside.

Shortly after breakfast, Zimmerman Marine called and said they had space on their dock and the mechanic was available. So we pulled up the anchor and motored less than 2 miles back down the creek to their place.  We were met by a couple of dockhands who were professional and helped to tie up our boat; they knew what they were doing.  We checked in at the office where Gail gave us all the information we needed and said she would contact the mechanic, “Bob” who would be down to our boat in a little while.

Zimmerman Marine is strictly a repair and storage yard. It is not a marina per se, but they do have docks for boats coming in for repair, or for temporary stay during a haul out or splash after storage. Therefore, accommodations are limited and not geared to “cruisers”. 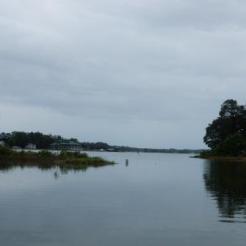 Enrance to Zimmerman’s from stern of IO 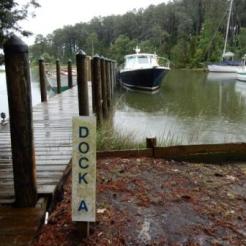 It didn’t take long for Bob to show up.  He has been with Zimmerman Marine for 17 years and has attended Cummins Engine training in Indiana, so we felt very comfortable with him doing the work.  Mark explained all the issues we had been having with the intermittent temperature on the engine, and what troubleshooting we had done so far.  Then they went into the engine room and did all kinds of computerized diagnostics while Denise stayed at the helm to turn on/off the engine as required.

Roughly an hour later, Bob and Mark deduced they should replace the impeller, and in the process discovered our issue; the inner part of the impeller had come apart from the outer ring. So when Mark looked at it in Poquoson but didn’t remove it, it appeared ok, but it wasn’t.  Bob said he had only seen this 2 other times and so he took it back to the shop to take pictures and to check inventory for a replacement.  We have a spare impeller on board, but Bob suggested we not use it as it was from 2013 and if we wanted reliability we should use a new one. At $50 a part, it would not be prudent to put one in that is 6 years old. Bob also checked on the engine coolant temperature sensor which appeared to be in good working order, but again wanting reliability, we opted to replace that too.

Impeller – Not supposed to be seperate

Impeller – this is how it should be

When he returned we learned both parts were not available on site, but he should be able to have them here tomorrow. We would have to stay the night which was ok by us as we had shore power (no more generator to heat the boat), internet access and a few chores to do. Since we are in a very rural part of Virginia and there is nothing around us except houses and this repair facility, we stayed on the boat.  Plus, it had started to rain again so we weren’t anxious to go anywhere. Denise put shelf liners in the refrigerator drawers and Mark took care of a few business related items.

Other boats in for repair

In the late afternoon the rain stopped and the skies were clear. Denise went for a walk and met Rose, one of the women on a boat three slips away (”Catherine”). She and her wife are from Seattle, but she is originally from Eustis. After taking their sailboat from Seattle down the west coast, through the Panama Canal and western Caribbean, they decided to sell it and buy their current boat; a trawler.  Coincidentally, they took delivery of it at Harbortown Marina in Merritt Island (our home port marina). It really is a small world!  They chatted for a while but it was time to get dinner going, so Denise headed back to the boat.

After preparing and eating dinner, we settled in for an evening of reading, completing this blog, and watching a little TV before going to bed. And once the sun went down we had to put the heaters on – the low tonight will be 50°.

If all goes well tomorrow we will be able to have the repair completed and we can move on to an anchorage on the Rappahannock River. If not, we will spend another night here.

Here are some pictures of the Zimmerman Marine facilities:

Trailer for haul out

Stay tuned for more of our adventures on Island Office.

This entry was posted in Down East Loop and tagged Mobjack Bay. Bookmark the permalink.