Kittery (Monday, 7/3)
After a great and late evening in Annisquam, it was hard to leave to leave too early as we were a bit tired. But the sunny weather and calm waves called us to make the 28 mile run up the Massachusetts coast before it turned too windy.

We also had to time the tide so we could arrive at the Badger Island Marina in Kittery at slack tide. The current on the Piscataqua River is known for being one of the worst and docking can be unruly for all the marinas that are located on it. 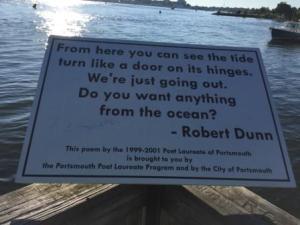 But it was a great morning on the water as we cruised up the coastline, passing the Isle of Shoals to the east, and soon thereafter going into the Portsmouth Harbor Inlet.  Here we passed by state parks, private homes, the Coast Guard station, and eventually Portsmouth Naval Yard.

Hampton Beach from the Atlantic Ocean 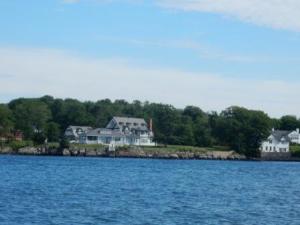 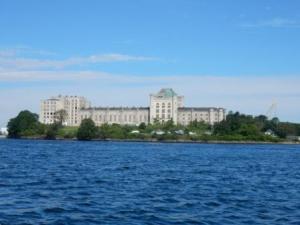 It was going up this river that we finally entered Maine; the state of our final destination for the summer.

We pulled into Badger Island Marina where we had reservations for 3 nights. Dave the dockmaster was very helpful in putting us in a slip very close to shore as to minimize the rocking from the wakes of passing boats, and to assist with the fast current – even though we arrived perfectly at slack tide.  Maneuvering into this slip was very tight and tricky, but Mark did an excellent job and with Dave’s help onshore we were able to tie up safely and without incident. We settled the boat, checked in at the marina office and ate some lunch.

In the afternoon we met up with Denise’s Aunt Judy and her Indiana cousins who were visiting Aunt Judy.  It was a special treat to see Greg Shatto and his family (wife Kelly, son Noah, and daughter Paige) again so soon.  After years of not seeing them, we were fortunate in visiting Indiana on a side trip when we did the Loop in 2015-2016.  Now in less than 2 years we got to see them again.

Together we walked around Prescott Park in downtown Portsmouth and enjoyed the fresh air and time to chat.  We strolled around the outdoor stage where the play “Merry Poppins” was running every evening, and the entire area surrounding it was decorated this theme. We also walked through the large gardens they have, including a beautiful area that has 3 fountains and lovely flowers.

Fountains in the gardens

We then attempted to see the restored old homes at Strawberry Banke.  Unfortunately, they were setting up for a special event in a big tent on the property and the museum entrance was around the corner and up a block or two.  As it was too far for everyone in our group to walk we opted to not go in and walked back to the car.

We had been invited to lasagna dinner at Aunt Judy’s and so we all headed to Somersworth (crammed into Greg’s truck) which is about 20 minutes from the marina.  After dinner we all headed back to the marina to watch the fireworks in downtown Portsmouth from the cockpit on our boat. Aunt Judy was kind enough to let us use her car, so we didn’t have to squeeze into Greg’s truck, but we did have to find a place to park both cars.  Mark has good parking Karma and was able to secure a spot right near the marina and we gave the marina parking pass to Greg as his was the bigger of the two and harder to find parking.

It was a great way to end a terrific day with family, and we made plans to connect the next day.

Kittery (Tuesday, 7/4) – Independence Day!
Even though we were a bit tired from yesterday’s activities, Denise got up and went running before it got too late and hot. She ran over the bridge back into Portsmouth, through the park and along the waterway until she could go no further.  She then circled back and ran around the streets of the downtown and then back over the bridge to Kittery until she finished 4 miles.

Here are a few pictures from her run:

Later in the morning we met up with Judy and the Shattos, as well as Judy’s daughter Linda who had driven 1.5 hours to visit with her cousins.  We all met at Odiorne State Park where they have the Seacoast science center.  In the science center is a terrific Aquarium and lots of exhibits about marine life in this area.  They have several tanks of differing types of lobster (blue and white ones – who knew?) and they had one that was a huge 24 lbs.  The building itself is an historical home and overlooks the Portsmouth inlet. You can learn more about this wonderful state park here.

We found covered shelter in a large vacant tent that had been set up for some special event and dragged a nearby picnic table under it to enjoy our lunch.  It was a beautiful day and although the water was too cold for us, the kids enjoyed sticking their feet in and getting cooled off.

In the afternoon we headed back to Judy’s house, but decided to stop along the way and get an ice cream at The Ice House in Rye, NH. It tasted great, but was still no substitute for our favorite in these parts: “Lone Oak”. 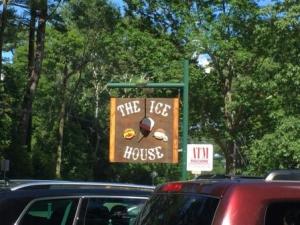 At The Ice House 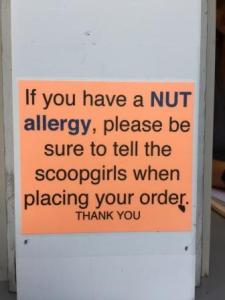 Who knew there was a job called “Sccoopgirls”

We had also stopped along the way and picked up some steaks and chicken as we decided to have a Bar-B-Que on this Independence Day.  Once back in Somersworth we enjoyed hanging out with everyone, including watching Noah build a model aircraft carrier, prepping for dinner, and playing cards.  We had a chance to meet Lynnmarie Judy’s good friend who helped her during Uncle Bill’s last days. 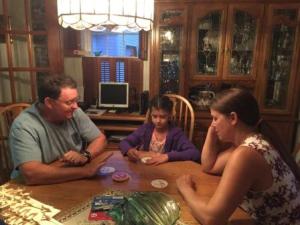 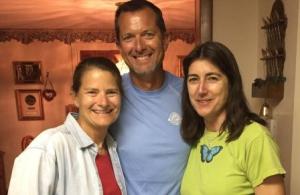 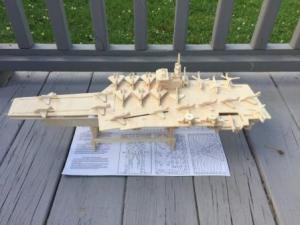 It was a great time, but eventually it was time to leave.

Kittery (Wednesday, 7/5)
Today was a day to do a few chores on the boat and since we had use of a car, run a few errands.  In the afternoon Mark did a little work and Denise cataloged pictures and worked a little bit on the blog.

In the afternoon we made plans to join Judy, and the cousins at Newick’s for dinner.  This is a must-stop lobster house that Denise’s family has traditionally dined every time we visited Judy.  We had an enjoyable meal and loved spending time together, but unfortunately we had to say goodbye to Linda who had to drive back up north for work the next day.

The rest of us left Newick’s and drove up to Rochester, New Hampshire to go get ice cream.  No trip to NH would be complete without a stop at “Lone Oak” and Judy indulged us.  Not only is the ice cream there so good, their “small” is like a double at most other ice cream stops.

Unfortunately, the line was long and it took a while for everyone to get served, and it got quite late. We ended up driving back to the marina in Judy’s car so no one would have to make a round-trip at such a late hour, but not before having a plan to get it back to her the next day.

Kittery (Thursday, 7/6)
We started the morning getting a few work things taken care of, and then we took the car back to Aunt Judy’s.  She then returned us to the marina and we said good bye, promising to let her know of our plans for the return trip when we know something more definitive.

We spent the rest of the day working on the boat and making a tentative schedule of places to see once we were north of Portland. We met with Dave the dockmaster who gave us lots of suggestions of all the places to go in ME, and identified a few places to avoid. We learned he spent a large part of his life on Florida waters and lived there for a long time; most recently Palm Coast area.  We shared stories of cruising Florida waters and cruising up and down the ICW.  We were grateful for his advice and made notes on our charts accordingly.

In the evening we walked to downtown Kittery for dinner. We went to a restaurant called the Black Birch, but only after waiting 15 minutes to get seats at the bar. 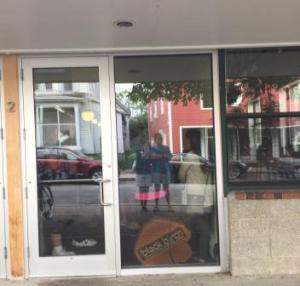 At the Black Birch

Here we got to view the terrific farm-to-table menu and watch the bartenders in action.  The bar has at least 20 microbrewery beers on tap and each one is designated by a tap head that is a figurative representation of the brewery.

Unique tabs for each microbrew

The other interesting thing about this place was the music. Instead of using internet radio, Pandora, or some other music forum, they were actually playing LP records on a record player. The sound was amazing! 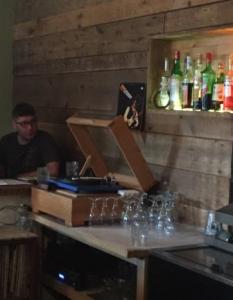 We had a great meal and really enjoyed this little spot.  We then walked back to the boat and made plans to leave for the Portland areas in the morning.

Here are some other pictures from the area around the marina: