Portland Yacht Club – Falmouth Foreside (Friday, 7/7)
We left Kittery and the Badger Marina under cloudy skies and slight sprinkles, but fairly small waves expected, so that didn’t bother us.  Plus, the rain was forecasted to clear up.

But first we had to get some fuel, so we went to the self-service fuel dock on the Portsmouth side of the harbor. This is used primarily by the fishing boats in the area and it is not the cleanest place. In fact, it stinks of dead fish and the dock is very filthy with fish guts.  Plus, the pump is about 10 feet above the dock, so Mark had to either climb a ladder to the pump to turn it on (and give it a credit card), or walk around the side of the dock where the fishing boats are and take a gangplank up and the pump.  Then fueling the boat became a two-person operation; Mark handing the hose and nozzle down to Denise who put it on the boat and advised when ready for the pump to be put on – all the while dodging fish guts and hoping not to track them back onto the boat. Then this had to be reversed once fueling was complete.  Let’s just say it is all part of the adventure. 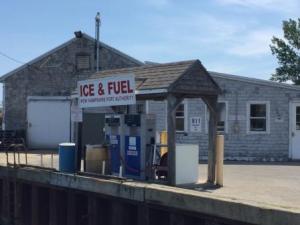 By the time we left the harbor and headed towards Portland the rain had stopped and we had a nice uneventful cruise up the coast. We could tell when we were approaching Portland as there are two lighthouses on Cape Elizabeth that are great landmarks.  One of the lights is no longer operational, but the tower still exists and is located now in the midst of a neighborhood. 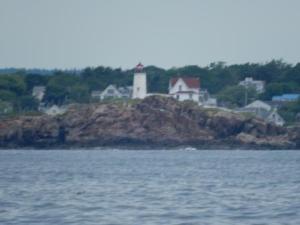 Passing Nubble Lighthouse – along the coast. We have been here by land before. 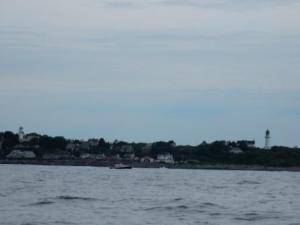 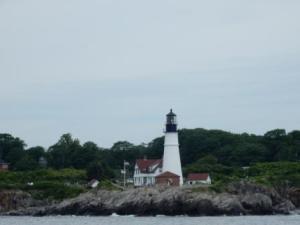 We entered the channel past Portland Light and continued past Spring Point Lighthouse in South Portland,  and around Fort Scammell (House Island) and then turned slightly northwest and headed around Fort Gorges. 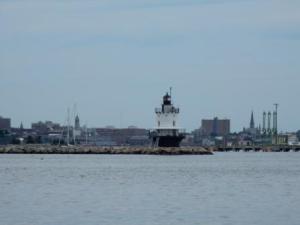 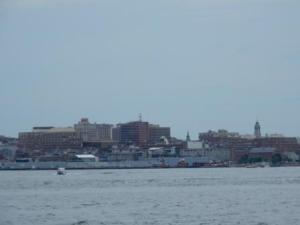 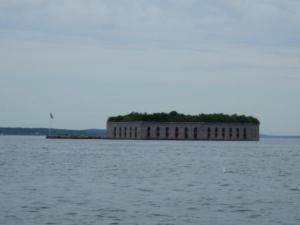 We then made our way past several large and small islands.  Soon we came into the mooring field for Handy Boat Marina, and then Portland Yacht Club (PYC) where we had a two-night reservation on a mooring ball. 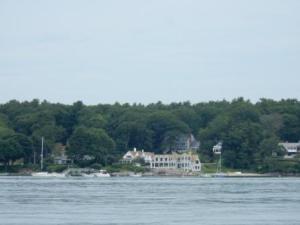 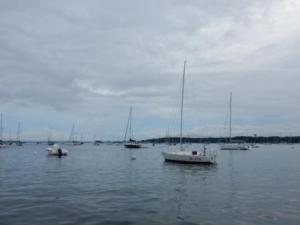 Mark wanted to hose off all the salt on the boat before we headed to our mooring, so we got permission to tie to their “Float” (i.e. floating dock) to do this. (More about “floats” later). We approached the dock and as Denise was getting to ready to tie lines to the cleats, Mark says “we know that guy”.  As Denise looks up she sees a guy we met on the Great Loop.  After we docked the boat we were greeted by “Bob” (“Velo-mer”) a Gold Looper who is working as a launch driver at PYC.  We had no idea he was here and was delighted to see him. 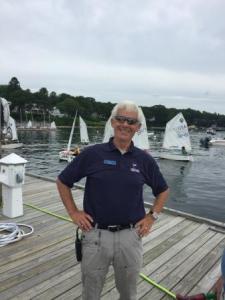 We met Bob and his wife (PM) in Orillia, Ontario on the Trent Severn Waterway, and saw them again at Green Turtle Bay in Kentucky.  We had shared drinks and stories then, so it was a real treat having him assisting us at PYC.  We chatted for a while and he told us that he saw our boat name on the list and wondered if it was us. When Mark called to get permission to tie to the float, he was the one who answered and he knew right away it was us but wanted to surprise us. So he chuckled when we were surprised to see him.

While Mark washed off the boat, Bob showed Denise to the Yacht Club where she checked us in and got the lay of the land. Back at the float we all chatted for a bit, before he had to get back to work and we had to move our boat to the mooring – which he helped us locate by escorting us via the launch boat directly to its location.  Finding a specific mooring which you are assigned to can be a real challenge in a crowded mooring field.

Once tied to the mooring we organized our boat, and ate some lunch. Then a short time later Bob showed up in the launch boat with a “welcome” package.  It was full of New England products and was a very nice gesture and surprise.  He also offered us the use of his car to go anywhere we needed.  As he was off at 3:00 and we had stuff to do on the boat, we agreed to take him up on the offer for tomorrow.  We did however, make plans to have dinner together with him and PM tomorrow. 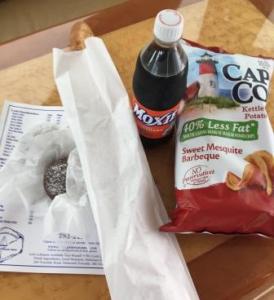 Later that evening, we went up the club for dinner and had a delicious meal.  This club does not sell alcohol, but you are welcome to bring your bottles to the bar and they will bring them to your dining table. Or, if you prefer you can sit in the bar and drink there, as all alcohol must come through them. We had our happy hour on Island Office, so we were good for the evening. 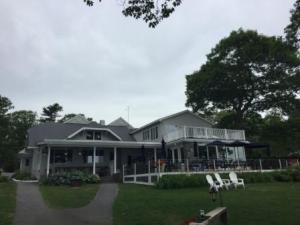 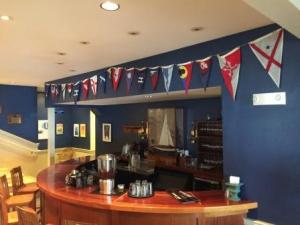 Portland Yacht Club – Falmouth (Saturday, 7/8)
Today we took Bob up on his offer to use his car; he had no need for it as he was working until 3:00.  We drove into downtown Portland, first to retrieve a package we had sent to the marina where we will leave the boat to go home for the family reunion.  Then we drove to a Hamilton’s – a marine store that Mark knew of – to pick up a copy of a Maine cruising book that had been highly recommended. This store was the only place we could find that had the very newly released 2017 edition.  We did this all-the-while negotiating around a road race (half marathon) that had a finishing line not far from the marine store.  The pedestrian traffic was crazy.  After that, we headed out to a Home Depot to pick up a few parts for our inline water system, and to the Walmart near the marina.  We were so grateful to Bob for use of his car as this gave us a chance to get some errands run, but also to see parts of the Portland area that we had not yet seen. 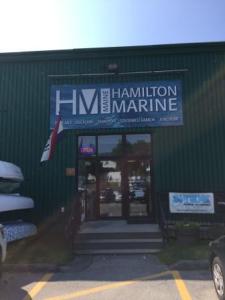 On our way back to the marina we stopped at the Town Landing Market to pick up some lunch for Bob.  They have a reputation for great lobster rolls, so we figured it would be a great way to pay him back for his generosity thus far. Once back at PYC, we took the launch (Bob driving) back to boat for our lunch. 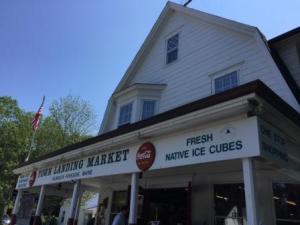 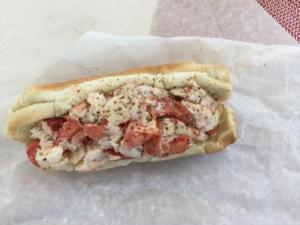 When lunch was over we took the launch back to PYC as Mark had some computer work to do, and Denise wanted to catalog pictures (and work on the blog). Since we were on a mooring we had limited power and we wanted to have better internet service.

Around 2:30 Bob came and told us that a very fast moving storm was approaching, and offered to take us back to our boat.  Initially we figured we had sufficient time before our evening plans, so we were going to stay in the clubhouse. However, Mark realized all the boat’s hatches were opened and he needed to go back to close them.  While he was on the boat the storm hit with a vengeance with pouring rain and howling wind. Someone later told us they clocked it at 60 mph. 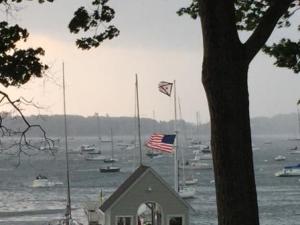 As fast as the storm came up, it went away equally as fast.  Within 30 minutes the rain had stopped and 15 minutes later there wasn’t a cloud in the sky. Perfect timing as Denise took the launch back to the boat in time to get ready for church.  Given the perfect weather now, we walked to mass at Holy Martyr Church, just a half mile from the marina. 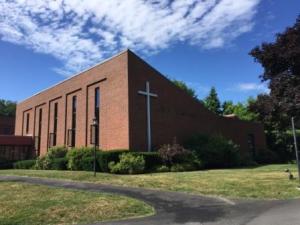 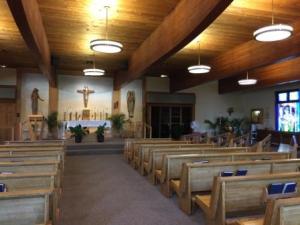 We arrived back in time for Bob and PM to pick us up and take us to dinner at “Buck’s Naked Bar-B-Que”.  We had an enjoyable time hearing of their plans to cruise the Bahamas in the winter, and then do the Loop again in 2018. 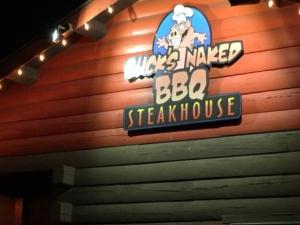 After a fine meal we went back to their boat which they keep in Yarmouth for continued conversations. 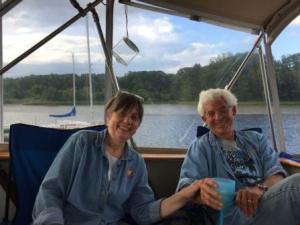 Finally, it was getting late and they took us back to PYC in time for the launch (which ends at 10:00 pm).

We really liked everything about the PYC. Its members are warm and friendly, and it is a beautiful facility in a great location.  We may consider revisiting it again on our way back home, should we need to come into the Portland area.

Here are some other things we saw in the area around PYC: 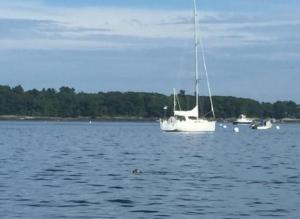 Otter in the water 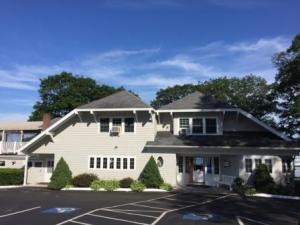 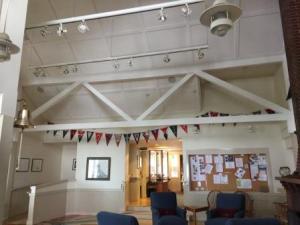 Inside main hall at PYC 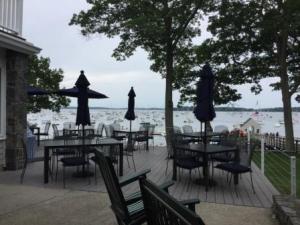 View from deck at PYC 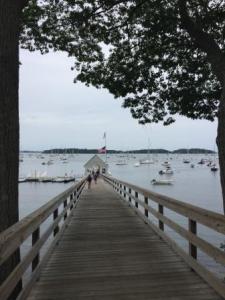 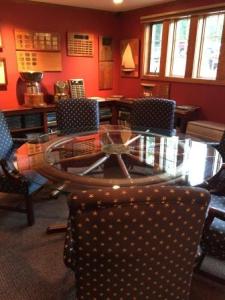 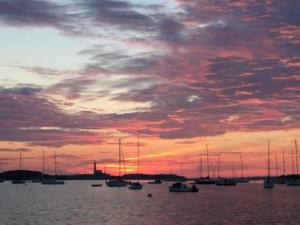 About “floats” & “launches”
Many marinas in these parts cannot have docks in the water year round due to winter ice.  So they use floating docks that can easily be taken out at the end of the season. The docks are usually attached to gangplanks that rise and fall with the tides (which can routinely be 8 -12 feet). For many yacht clubs they do not have marina, but only moorings – which are floating balls that are anchored to the bottom in some way and you can tie your boat off to it.  Then they do have some form of floating dock that can be used to tie up a dinghy, or for their launches to pick up or drop off passengers. However, sometimes the floats are stand alone in the water for boats to tie to, but are not tethered to any type of fixed structure.

Launches are no-frills low-riding boats that are used to ferry people to and from their boats located on moorings, which is the most prevalent way boats are “docked” or stored during the season. In the winter, boats are hauled from the water and put in either climate-controlled storage, or winterized and shrink-wrapped for storage “on the hard”.  At the start of summer or late spring, they are put back in the water on a mooring for the 10 -11 week season. 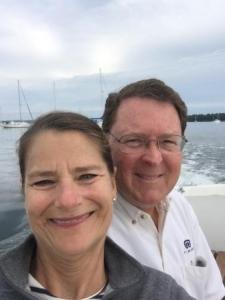 On the PYC launch

In some harbors the launch service is provided by the city (e.g. Port Washington, NY) and there is a fee for use each time. Most yacht clubs and some marinas provide a launch service which may be free, or included in your mooring rental (for transients). In most cases, it is a lot easier and faster to take the launch service than to use your own dinghy, which might be charged a separate fee at the dinghy dock (they want you to use the launch service). The downside to launch services is that you are dependent on their schedules and if your dinner or social engagement runs too late at night, you might not be able to get back to your boat before they quit for the night. So, you have to plan accordingly.

When you make multiple trips per day on the launches as we did at PYC, you get to know the drivers of the boats. We became very fond of Hannah at PYC and enjoyed talking to her about her future plans. She is going to Maine Maritime Academy and wants to drive big commercial ships. Not typically an occupation for a female, but she is going into it with eyes-wide open as she loves being on the water.  She is bright and we wish her all the luck! 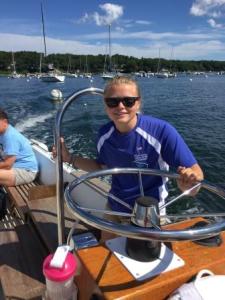