Poquoson, VA (Tuesday, 10/17)
It was wonderful to actually see blue skies today, but the wind had picked up through the night and was blowing so much that we had 1’ waves in the marina.  Plus it was cold this morning at 55 degrees, and we had slept with blankets on the bed and the heater on.  Fall has finally arrived, and now it will be ok to move south to warmer weather.

In the morning, Denise worked on cataloging pictures and posting blog update, while Mark did some work for a client and confirmed the dinghy repair would be done tomorrow and ready for pickup in the afternoon.  Not wanting to pay their nearly $160 fee just to deliver the dinghy, Mark then started scheming about how we could get the dinghy picked up and delivered to our boat at Bluewater Marina in Hampton; where we will be moving the boat tomorrow.

After lunch Russell (“Overdraft”) stopped by the boat to offer his hospitality and use of his truck. He is retired and stays on his boat, so he is usually around. We discussed our dinghy situation and he offered to help Mark go get the dinghy and pick it up with his truck. This became our plan and we made arrangements to connect on Wednesday after we had arrived at Bluewater Yachting Center in Hampton – our next destination.

This afternoon we also received a call from the folks at Harbortown Marina, our home port.  They advised a slip had opened up for us and we could come in to E-dock any time after 11/1.  We were delighted that we could now be in this great hurricane hole.

Now that we had a resolution on the dinghy, we took the afternoon to plan the itinerary for the coming days.  We called a few marinas regarding their status post-Matthew and Irma and were happy to hear that Jekyll Island is back in business.  We plan on stopping there again as we had so much fun there on our way north.  We also planned for 2 – 4 days in New Bern, NC – depending on if Mark will go to visit a client there.  With all ports laid out and with few passages having weather issues, we should be home by 11/5.

Because we liked the place so much, we decided to dine at Surf Riders again for dinner.  The food was good and it was not near as crowded as it was on Sunday night.

Here are some other pictures of the area near Whitehouse Cove Marina:

Boat houses at the marina

Hampton, VA (Wednesday, 10/18)
During the night the wind calmed down, but the temperatures were a bit cool. 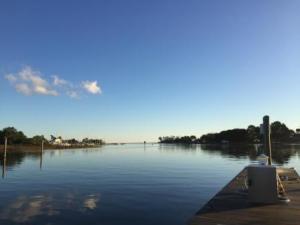 Denise managed to get in a run around the homes near the marina once it warmed up a bit. She was back in time for us to untie the dock lines and head out onto our final day on the Chesapeake Bay.  We first had to exit the Poquoson River and round the very shallow area known as the Poquoson Flats, passing by the house owned by Chris’s boss (Christen’s husband).

Once past that area we headed almost due south and continued along the coast to a little bumpy, but not untenable waves.

Out on the bay there were lots of boats, most all heading south as it was a beautiful day to be on the water.  We passed along Fort Monroe and saw the lighthouse, as well as the Chamberlain (formerly hotel and now senior residential home) that Jeff (“YOLO”) had told us about on Sunday.  We saw a bit of Navy traffic as well. 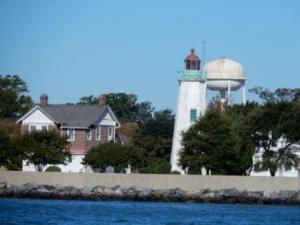 The Chamberlain at Ft. Monroe

Inbound Navy ship – on our stern

Eventually we came into the channel for Hampton, pulled into a slip at Bluewater Yachting Center, and settled the boat.

As if we had perfectly planned this, Russell contacted us and said he was nearly there to meet us with his pick-up truck.  He was going to take us to get our dinghy.  He showed up and we treated him to lunch at the restaurant onsite at the marina – a Surf Rider!  Of course the food was very fresh seafood and we enjoyed our time talking to him and getting to know him better. He is a great guy and hopefully this will be the start of a wonderful friendship.

After lunch we drove to Davis Boat Works and picked up our dinghy. In less than an hour we had retrieved it, drove to their business office up the street to pay the bill, returned to the marina and deployed the now repaired dinghy. 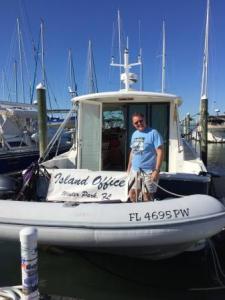 Along the docks, we encountered Ericha & Curtis (“Mamie Lee Too”) whom we had met at Liberty Landing in Jersey City.  After Russell left, Curtis helped us get the engine on the dinghy and then Mark helped them move their sailboat to the pump-out dock and back. This is the friendships that develop in marinas – boaters helping out other boaters. It is the way it should be!

Later in the day we had a “Happy Hour” onboard “Mamie Lee Too” and got to know these new cruising friends a little bit more. They are with a whole group of other sail boats who are heading to the Bahamas for the winter, and this is their first time this far south. They had to leave for a captains meeting with their flotilla so we headed back to our boat.

Just as we returned to our boat, our niece Shannon called to say she was 5 minutes away.  She and the girls would be picking us up for one last night together. Her husband (and firefighter) Shawn was working and Christen and her family were unavailable, so it would just be the 5 of us.

We went to a local joint called the “The Barking Dog” that is known for its awesome hotdogs of all types.  But they also serve other very good food as well.  Denise got their special for the night; chili – just what was needed on this cool night.  Mark got an Italian sausage dog and Shannon got the crab cake sandwich; all of which was delicious.

Shannon and the girls

Afterwards, Shannon graciously took us to a Walmart so we could buy a few things before leaving, and then we said our final goodbyes at the marina.  Tomorrow we will leave the area and head for home.