Hilton Head, SC to Brunswick, GA (Monday, 10/30)
Even if we wanted to leave early, we could not as we were dependent on the dockmaster to operate the lock. They don’t come in until 8:00, but that didn’t stop us from pulling out of the slip and queuing near the opening.  As soon as the dockmaster arrived Mark drove us into the lock without incident, and within 10 minutes we were through it and on our way. 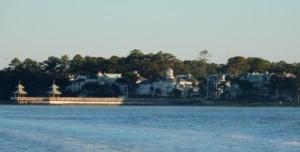 We headed south on the ICW and the meandering course it takes in this part of the state.  We crossed the Savannah River and entered the state of Georgia.  Soon thereafter we passed the marinas that line the town of Thunderbolt to its South, and bypassed the slow (no wake) zone around Skidaway Island and Isle of Hope, where we stayed on our way north in April.

Then, we approached an area known as Hells Gate near Raccoon Key that is aptly named for the extreme shoaling.  Of course we hit this ¾ mile stretch of the ICW at low tide and it was not good.  Even though we were in the dead center of the channel, at one point our depth gauge reported less than 3’ and we draw 3’ 3”, but we managed to stay afloat. Perhaps the mud here was soft enough that it kept us from a hard stop grounding and our motion pushed us through. This area is in desperate need of dredging as hurricane Irma has made it far worse than it was when we went through here on the way north.

Once through that area, the rest of the trip was uneventful; cruising through the serpentine of rivers and inlets that connect that make up this part of the ICW.  The most exciting part was coming into view of the bridge that crosses the Brunswick River as it is clearly visible when we were about halfway down the coast of St. Simon’s Island to our east. 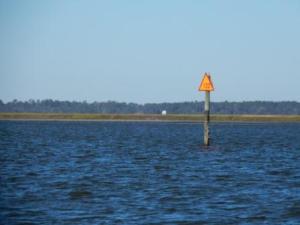 Soon, we turned up the Brunswick River, went under the Lanier bridge and headed north up the East River passing the freighters being loaded along the eastern shore.  We pulled into the Brunswick Landing Marina where we had reservations for the night. The primary reason for stopping here was that they had the best fuel prices and we were in need of a fill-up.  Otherwise we would have continued on to Jekyll Island where we were spending the next two days and is only 30 minutes further south. But after 108 miles we figured we had gone enough and we liked the discount on fuel that the marina offers its transient guests.

In addition to the inexpensive fuel, this is a great marina with reasonable rates and great perks.  These include:  good internet, loaner bicycles, free laundry, free beer & wine at their nightly happy hours, and free back scratchers – of which we now have a few.  We also like the Thai restaurant in town (Basil Thai), but alas we discovered they are closed on Monday evenings.

Once we finished fueling, we moved into our assigned slip, settled the boat, and then opted for our own cocktails aboard (skipping the ones offered by the marina).  We then used the bikes to go to Tipsy McSway’s for an early dinner.  We had eaten here before and last time the place was packed. As the marina was very full and there were only 2 restaurants in town open today, we were concerned that we might have a wait for a table.  However, when we arrived and the place was mostly empty and it never filled up while we were there.  Unfortunately, this is a sign that this downtown is really struggling to stay afloat.  If it wasn’t for the seasonal boaters it probably would not be sustainable at all.  All the growth is near the airport and the businesses there are thriving.

After dinner we rode the bikes back to the marina, getting in just before dark. We spent the rest of the evening relaxing and talking to neighbor boaters along the dock, and then mapping out our plan for leaving in the morning.

One response to “Back to Brunswick!”