Meet up in Murrells Inlet!

Posted on November 8, 2017 | Comments Off on Meet up in Murrells Inlet!

Southport, NC to Murrells Inlet, SC (Thursday, 10/26)
It was a glorious morning and Mark was still asleep when Denise went for a run around the town of Southport.  Here are some of the pictures from things she saw on her run that are different from her last time running here: 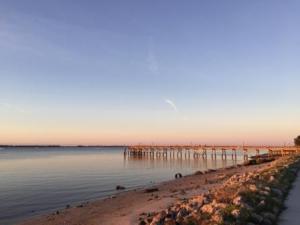 Sunrise over the ICW

The Christmas House – store in Southport 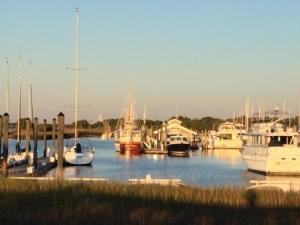 When Denise returned from the run we made preparations to leave, shoving off the dock at 9:00 am.  By this time several yachts in the marina had already left, including Lady Catherine.  It was cool outside (55°) and we were concerned that we might have to run the generator to keep us warm while underway. However, we did not have to do this and it ended up being a nice day to be on the water.

We cruise past a few marinas just outside of Southport, making a note that they are possible substitutes if we come back this way and cannot stay in the Southport Marina.  From there the ICW turns southwesterly (again) and we headed through areas with houses lining both sides and lots of docks with boats up on lifts. Occasionally we would come across boats in the water and would have to slow for them as well as the many small fishing boats out to get their catch of the day.

We went past St. James Plantation, a planned development with condos and a large protected marina that has received good reviews from other cruisers.  We may have to plan to come visit this place sometime. 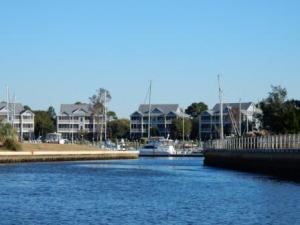 About 45 minutes later, we passed “Lady Catherine” who had left Southport earlier and was cruising at about 8 knots.  We made a slow pass around them and were able to radio back to them about the shoaling we found as we transited the shallow area near the Shallotte Inlet.  With all this distraction we passed the Inlet View Bar & Grill recommended by Mack (of Dowry Creek) and forgot to check it out; remembering too late as it was out of view. 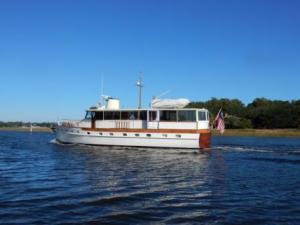 We continued our way winding through the ICW and the Little River Inlet area that was being dredged when we came through here in the spring.  Fortunately, the dredging was done, the channel was wide open and the water was deep.  But more importantly, we now transited into South Carolina.  Yippee!  We were finally done with the ICW in North Carolina.

Soon we came to North Myrtle Beach and the Little River Swing Bridge. Fortunately this bridge opens on demand and there was no real wait.  There were not many boats on the water at this point and it was a good thing as the channel is very narrow through this section.  Here the ICW is lined with nice homes and sometimes condominiums and a few marinas.

Not long after we passed under the Barefoot Landing Bridge and by the Barefoot Marina where we stayed for a week in the spring. Here we saw our friend’s boat “Bee Haven” – a Fleming 55 and their new boat, a Fleming 65, right beside each other.  We met them in Vero Beach on our very first week-long adventure, right after we bought Island Office.

We also saw where the planned redevelopment project of Dockside Village on the eastern shore was well underway. This is the area located on the hill above Barefoot Landing Marina where Denise rode her bike when we stayed here in April. The redevelopment plans call for a total reconstruction of this touristy shopping area, closing in a large man-made pond and opening a “Lulu’s” – the third of this themed restaurant by Lucy Buffett; singer Jimmy Buffet’s sister. As we were preoccupied with fixing and eating lunch while underway, and seeing all that was going on, we did not take any pictures of this area.

Sometime during the day yesterday when we were pushing to get to Southport, we learned that the planned shutdown of the ICW south of the Socastee Bridge in Myrtle Beach had been postponed, and we no longer had to be concerned about it affecting our schedule on Friday (10/27). However, even as exhausting as it was, we were still happy we had gotten through all those NC miles yesterday and were now able to pass by the area today without any encumbrances.  When we came to the area, we could see where the new highway bridge was being constructed and the infrastructure they built to hold the cranes used in constructing the bridge.

We were not far from our intended marina for the evening, but we had been “shopping fuel” all afternoon for the best prices.  As was the case when we were heading north, the Osprey Marina had everyone beat when you include sales taxes and (BoatUS) discounts. So, we turned down the narrow channel off the ICW and pulled in for a “fill-up”.  We had considered staying her for the night, but we wanted to push on a little further south and meet up with some Looper friends in Murrells Inlet.  It took a short while to fill the tank, and then we were back on the ICW in no time.

Osprey Marina for the fuel-up

We continued on the ICW and finally our compass actually showed us heading south (not southwest)., We passed by the Bucksport Marina (another fuel and potential stopover) and entered the Waccamaw River – one of the prettiest parts of the SC ICW.  On both sides of the river cypress trees line the waterway and most all the development is inland or on the barrier islands to the east. This means few docks with boats that will slow us down.  It is wildlife at its finest.

Finally we pulled into the Wacca Wache Marina, where we were put in a long slip in front of the building that faces the ICW.  The larger part of the marina is behind a spit of land on which the building sits, but our guess is this is for seasonal or permanent boats; transients are assigned the slips up front, and we were the only ones there for the night.  There was a 3-masted sailboat across the ICW in a secluded anchorage, but no one else was there as well.

Anchored across ICW at Wacca Wache

Denise checked us in at the marina office and got the requisite information (bathroom key, WiFi Password, etc.) while Mark hosed the salt off the boat.  We had several people walking the docks stop and admire our boat; something we have become quite used to now.

The marina has very nice facilities and an on-site restaurant that we would have eaten at if we did not have plans. However, we were dining with Looper friends Ann & Jeff Timmons (“Harvest Moon”) and they were coming to pick us up.  We first met them at Hoppies on the Mississippi River, and later rafted together at an anchorage before heading up the Ohio River. Originally from Syracuse, they now live the nomad lifestyle; they spend winters in Cape Coral, FL near Jeff’s mom, and summers in their “cottage” in the thousand Islands of Canada. They have sold their Looper boat (“Harvest Moon”) but are missing being on the water and traveling with others.

The Timmons met us on the boat for drinks onboard first, and then took us to eat at a local favorite called “Prosser’s Bar B Que Buffet”; Mark was in hog heaven.  Some of the food was only ok, but the fried chicken and shrimp were good and the company was outstanding.  We talked for so long that we were nearly the last people in the place when they were closing (8:00 pm).   Afterwards, they dropped us off at the marina and we promised to keep in touch. If we get to Southwest Florida this winter we will be sure to look them up. 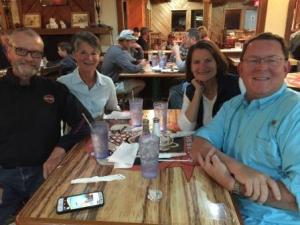 With Ann & Jeff Timmons at Prosser’s Bar B Que

Once back on the boat we took in the beauty of this place. During the day the marina is busy with boats pulling in to go to the restaurant or to get fuel. But at night there is no traffic on the ICW and it is very peaceful, albeit the cries of the osprey or hoots of the owls.  There is little to no light pollution as well, so you can see a million stars.  Truly this is God’s work and we felt so blessed to be able to see it.