Not so New Bern!

New Bern, NC (Easter Sunday, 4/21)
Who would have guessed that with the wind blowing so hard last night, we would have woken up to a much calmer marina.  It was like someone turned off a switch and the wind died. Mother Nature really is truly remarkable.

Denise got up and published the last blog while Mark got to sleep in a little longer.  She saw our friends on “Seabird” off and wished them luck in the travels back to Connecticut. We hope to catch up with them on our way through the Long Island Sound area in the fall.

Before leaving Beaufort, Mark decided we should top off our fuel and the best price around was at our marina.  This should give us enough fuel to get all the way to Top Rack Marina near Norfolk; a known spot for buying good cheap fuel.  Because of the holiday the fuel dock would not open until 9:00, so we left our slip and tied up there until owner Tony was available.  While fueling, we had a chance to learn a little bit more about him. He used to have fishing boats here in Beaufort and in St. Augustine, but the industry had changed and he got out of that business.  We also got to meet Roy, his employee who was responsible for washing the bird poop off the docks every morning, as well as other chores. Not all marinas do this and we are so grateful that this marina does. We told Tony that we really liked this place, and would be coming back to stay again in the fall. 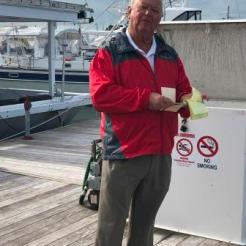 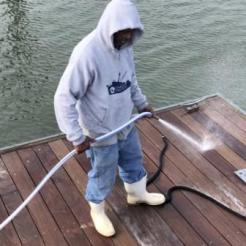 Mark went with Tony back to the marina office to pay the fuel bill. While waiting Denise got the boat ready to go, including turning on the engine to get it warmed up.  This must have been a signal for “Ms. Darlene” to exit her slip, thinking we were leaving immediately.  But, Mark was still not back and so “Ms. Darlene” had to wait in the narrow channel by the fuel dock.  The captain was really cool about it, but had to do some fancy maneuvering when another fishing boat came up behind him and needed to go through the narrow channel. He managed to pull into the slip next to the fuel dock while waiting for the other boat to go by. 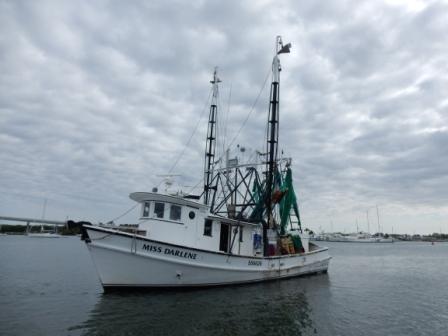 Meanwhile Mark showed up and in 5 minutes we were off the dock and underway. We headed out of the marina and up the ICW through Core Creek.  We passed along familiar sites of the True World Marine Boatworks, Beaufort Marine Center, and Jarrett Bay Boatworks; a fuel stop we usually use, but not so cheap anymore.  There were several derelict boats in the area and like FL, we cannot understand why these have not been salvaged or hauled out of the waterway yet. 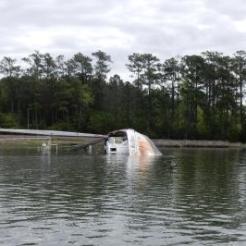 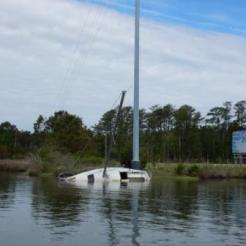 Another derelict boat in Core Creek

Continuing north we went under the Core Creek Bridge and along what eventually becomes Adams Creek.  We both were amazed at how much development there had been in this area in the last two years.  It seems like where there is water, people build houses and docks; sometimes the toys are worth more than the structures on land. 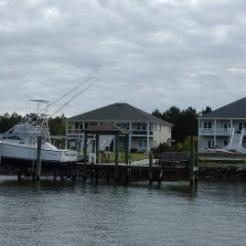 Boat and home along Core Creek 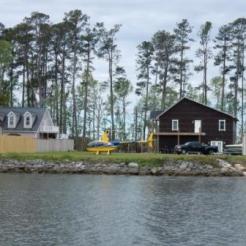 Soon the houses gave way to more rustic surrounds, and the river opens up wide with little coves on either side. We anchored in one of these coves in 2017 while waiting on the wind to die down before crossing the Neuse River. There are some houses along the shore, but they are not near as close together as before. 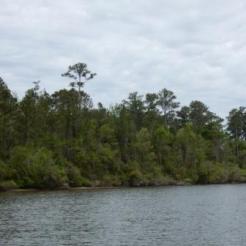 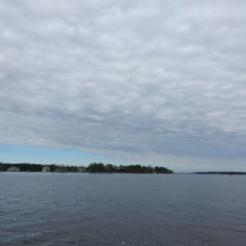 We turned left and headed up the Neuse River (the ICW actually goes right). Even with the little bit of wind on our nose, it was a cool but spectacular day to be on the water.  We definitely made the right decision to stay the extra day in Beaufort. 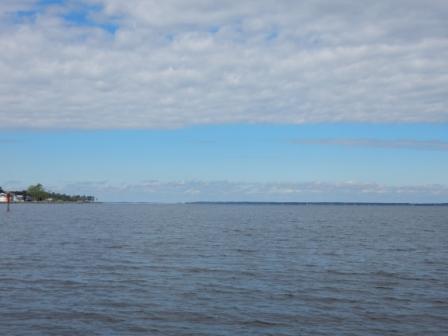 Intersection with the Neuse River

It is 20 miles off the ICW up the Neuse River to reach New Bern, NC, and so for us it was a nice hour of great cruising.  We cruised past the Pine Creek Recreation Area and MCAS Cherry Point, totally enjoying the beauty of being on the water. 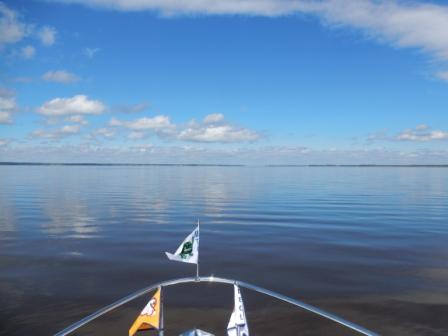 Great Day on the Neuse River

Having stayed in the New Bern Grand Marina in 2017, we were looking forward to coming back. We were happy to be back in this town as it is quaint, but with a rental car it give us access to conveniences and places we often miss when cruising: Publix, Walmart, etc.  This area was almost destroyed when Hurricane Florence came through in September of 2017 and you can check out a video about it here. However, we had read an update on Active Captain from December of 2018 with rave reviews and heard it was operating again.  Denise was looking forward to the pool and gym access of the nearby Doubletree hotel.

Since we had received our slip assignment in advance, we went under the New Bern (US 17) and Alfred Cunningham (US 70) Bridges and easily navigated to our slip. 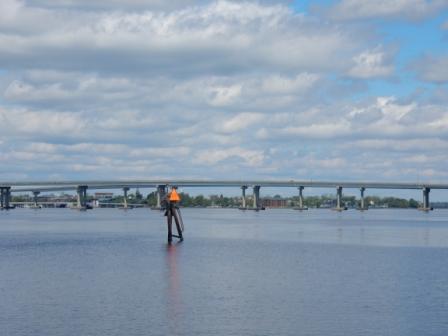 We tied up the boat with a little assistance as no one from the marina office replied to our VHF calls on the radio.  This did not concern us as the same thing happened when we were here before.

After tying up and settling the boat, we were met by a local woman who is a live-aboard. She advised us that the Doubletree was closed, the restroom and laundry facilities were not available, and the marina office was temporarily relocated to a small building about 2 blocks away.  We secured the gate access code and the WiFi password from another live-a-board boater and then walked up to check in at the relocated marina office.  We found a sign on the door that said that they were closed for Easter! Could they have not told us this in advance in the email when they confirmed our reservation and gave us the slip assignment? 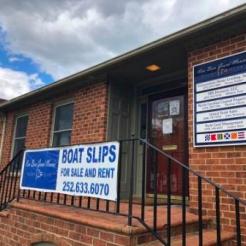 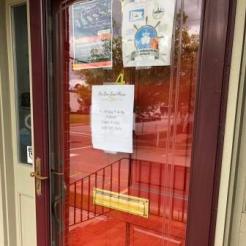 We were not happy about this and Denise tried to come up with alternative plans, including leaving and going to Oriental, NC.  But every alternative we considered left us with not being able to meet certain requirements, including access to a rental car for Mark and a place to go to church next Saturday evening.  We walked back to the boat by way of the Doubletree and could see evidence of the renovations, but also some of the destruction from the hurricane. 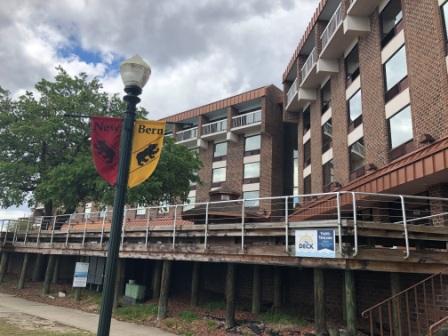 Damage to the Doubletree

Once back on the boat, we requested an Uber and took it to the New Bern airport to get Mark the rental car he would need to drive to and from his client all week.  It was like having freedom!  We stopped at Walmart to pick up some things that we were unable to get in Charleston, and went back to the boat.

When we stay at a marina more than one night, we really settle in as if we were staying forever, including connecting to cable tv (if available). We have become so used to streaming via WIFI that we almost forget to ask if it is available as few marinas are offering it as they beef up their WIFI. However, this benefit is one of the items that is still as advertised at this marina, so we hooked up our cable and watched real TV for first time in two weeks. Denise is excited about having the Hallmark Channel for the next 6 nights.

Our Easter dinner was uneventful; we ended up cooking chicken fajitas.  In the middle of dinner preparation, we were visited by a couple of Loopers. Paul and Caryn Frink (“Seeker”) saw our Gold Looper burgee and stopped to say hello.  They completed the Loop in 2017 and want to do the Down East Loop. They went to Maine in 2018, but only as far as Portland before it got too late in the season and they headed south.  They have been here in New Bern since November and will be leaving at the end of the week. They told us about “Taco Tuesdays” – an event for anyone in the marina at a local restaurant, as well as a breakfast on Thursday mornings.  We may attend the Tuesday evening event, but only if Mark gets done at the client site in time.

After they left, we ate our dinner, did some measuring for an upcoming boat project, (Denise) worked on the blog and (Mark) watched an episode of Game of Thrones before calling it a day.

Tomorrow Mark will drive to the client site and Denise will work from the boat; starting off with a 9:00 am conference call. When time permits there is the “honey-do” list, which will include retrieving a package from the marina office that was (hopefully) delivered in advance of our arrival.

We hope this Easter (or Passover) holiday was good for you, and that the coming year brings you joy and peace.

Other pictures from today: 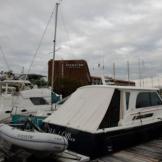 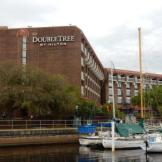 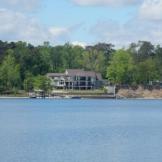