New Bern, NC (Monday 4/22)
Wanting to go for a run and get back before Mark left for his client, Denise set the alarm for 5:30 am.  When it went off she rolled over, turned it off, and fell back to sleep. When the backup alarm went off (for Mark to get up) she woke up but by then it was way too late to go for the run. Apparently the body needed sleep over exercise.

Once Mark left for his 45 minute drive to the client in Washington, NC, Denise took some time to do work for her clients and doing administrative office tasks.  After that, she ran some errands in downtown New Bern.  First she mailed her old running shoes home so as not to take up valuable space on the boat.  Then she had a task to take a magnet door screen to a canvas place and have it cut and sized so it will fit on the back door of the boat. This is our latest project.  Then she checked in at the temporary marina office and picked up a package Mark had delivered there.  In the afternoon she went back to the canvas place to pick up the screen and then back to the boat for more work.

In the evening, when Mark came back from the client site we went on a mission. This time we were looking for a solution for attaching the screen to the back door of the boat.  Seeking the Scotch® “Restickable” tabs for mounting, we first checked at WalMart, but ended up finding them at Staples across the street. All of this was in the same vicinity of all the box stores for New Bern. There was also a Panera Bread which is where we ended up having a light dinner.

Once back on the boat, we discussed how best to attach the screen with the tabs and agreed to give it a try one day this week when we need it.

New Bern, NC (Tuesday, 4/23)
This morning Denise did get up early enough to go for a run along the Neuse River and through the downtown neighborhood with older historic homes. Most of these either line the water or are across the street, and were impacted by hurricane Florence.  Although some have already been repaired, many are still a work in progress. Here are some pictures from sights on her run:

Path on the Neuse River 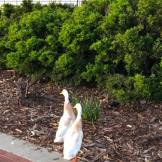 Geese hanging out in park 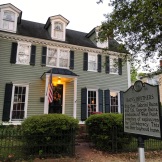 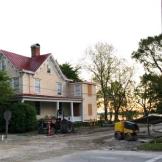 Mark left for the client site and Denise then spent the whole day doing a boat preventative maintenance project that we wanted to do before we left home, but ran out of time. She polished all of the inside of the galley, helm station and main salon. This included polishing all the wood, waxing all the fiberglass, and cleaning the floors.  Even though it is less than 100 square feet of living space, it is tedious work and exhausting.  But once done, the boat looked great.

Not long thereafter, Mark called to say he was on his way back to the boat, giving Denise time to get a shower.  We then went to Dinner at “The Chelsea”; a pretty good restaurant in downtown New Bern. We ate here the last time and really liked it, so we wanted to go back, and we were not disappointed.

New Bern, NC (Wednesday, 4/24)
Once again the morning, Mark went to work at the client site and Denise did some work from the boat.  Around noon her cousin Elizabeth, husband Ken and son Daniel (now 13) came for a visit.  Although from Ohio they were on Easter break visiting Elizabeth’s dad in NC, and made the drive to visit us.  This is the same cousin that came to visit us in Key Largo in March 2016 when we were finishing our Great Loop adventure.

Shortly after they arrived we went to lunch at Morgan’s Tavern & Grill, then to the Pepsi Museum more of a touristy souvenir shop than museum. Since New Bern is the home of where Pepsi was formulated, it’s a must-see place when visiting.

We then walked to Tryon Palace; the first permanent capitol of North Carolina and home to the Tryon family.  Completed in 1770, it was the site of the first sessions of the general assembly for the State of North Carolina following the revolution, and housed the state governors until 1794.  We walked around the gardens, but did not take the tour inside the actual home. Here are pictures from here: 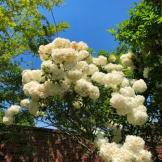 We then went to Cow Café for a much deserved ice cream as it was hot and needed a refreshment.  Afterwards, Elizabeth & Ken went to visit an old friend and Daniel hung out on the boat with Denise.  This was a fun time for Denise to talk with Daniel as a young man and hear of his hobbies (many) and future interests (Eye doctor?).  He also got some time to text with his buddies from home, whom he was missing.

Ken & Elizabeth returned at the same time that Mark got home from client so it could not have been timed more perfectly. After some socializing time on board Island Office, we made our way over to Persimmons Waterfront Restaurant on the Neuse River.  Our dinner here was delicious, and the atmosphere was really great, overlooking the river and the nearby Galley Marina. However, the service was very slow which was really irritating as the cousins had to drive back to Fayetteville and we didn’t want to keep them too long. We were grateful for their visit as we always enjoy their company – it was the BEST surprise of our trip so far. 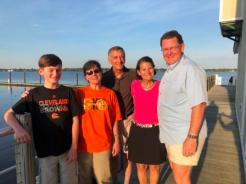 New Bern, NC (Thursday, 4/25)
In keeping with her 3-day a week schedule, Denise got up early in the morning and went for another run. This time she headed around the NC Historical Center, more historic homes, and around the New Bern Historical Society Gardens. She also ran through some of the downtown streets, including one that shared the same name of her running friend Jim Reed.  Here are some of the photos: 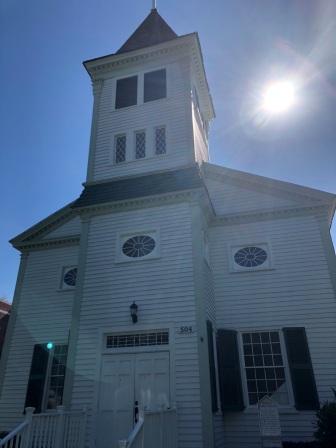 Denise got back in time to see Mark off to the client site. The rest of the day she spent time either working from the boat, or making up a salad for future lunches. In the afternoon, the marina pump-out boat came by and emptied our tank.  This is a free service offered by the marina, especially since their restroom facilities were not available. But a backlog of boats required upfront notice which Denise had done on Tuesday. Usually Mark would handle this particular task, but since he wasn’t available, Denise took care of it all.  If only they would have come later in the day, he would have been able to do it; a neighborhood-wide power outage at the client site closed the plant and Mark came home early.

In the evening we were able to meet up with our associate Bob Griswold and his wife Mary. Although retired, Bob does work for us on occasion when specific projects come up that can utilize his talents.  We first drove to their home, and then went to dinner at Crabby Patti’s – a local seafood restaurant owned by a former fisherwoman from Long Island Sound.  We were hoping to meet her, but she was not in the restaurant that night.   After dinner we went back to the Griswold house for continued conversation about their cats and politics.  Eventually, it was time to leave and we headed back to the boat for the night, happy that the wind had finally subsided.

New Bern, NC (Friday, 4/26)
Today was the last work day for Mark at the client site, and he headed off to their plant like the other days this week. Denise spent most of the day on conference calls with a client and with software reps; she also got some much needed reading done.

During the day, we had intermittent rain showers; a bit in the morning and then again in the early afternoon.  But in late afternoon the wind picked up a great deal and Denise had to take the canvas awning off the back of the boat; it was acting like a sail and bouncing the boat around. The evening forecast looked awful, with a big storm coming.  So, when Mark came in from the client site, we opted for a “to-go” dinner from Outback since it was located right over the bridge. Mark ventured out and for the pickup and arrived back just in the nick of time. The storm came up and had us under a brief tornado warning, but it passed quickly. Afterwards there was a noticeable drop in temperature and we no longer needed the AC on in the boat.  Time to once again break out the blankets to sleep tonight.

New Bern, NC (Saturday, 4/27) Normally we would have left New Bern and headed back on our adventure north. However, we had to consider where would be the best place to go to church this weekend.  Given the limited offerings until we get to Norfolk, we decided to stay in New Bern one more day and attend Saturday evening mass here. This would also afford us the opportunity to go to the grocery store and provision the boat for the week ahead.

To start off the day, Denise went for a run in nice cool 52 degree weather.  It was a great day for running and she was energized by the beauty along the Neuse River.

When she returned she talked Mark into going to the Farmer’s Market held here on Saturday.  It is small by comparison to Winter Park’s, but a few local growers, wineries, and artists had some interesting things to sell. 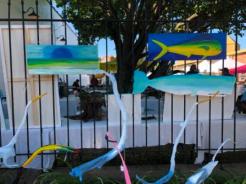 Once back on the boat we took care of a few boat chores (cleaning windows, etc.), took showers and then ate lunch.  After lunch we walked to the downtown hardware store for a tool Mark was looking for to assist with removing a plumbing fitting; just in case we need to do that again. They didn’t have it so we put Tractor Supply on our places to go to in the afternoon, and before the rental car had to be returned.  We also made a run to Publix for some weekly groceries.  Most likely this will be our last Publix shopping experience until October when we are back in the south. Even Publix here in New Bern has a bear in front of their store.

In the evening we went to mass at St. Paul’s for 5 pm mass, then we returned the rental car back to the airport.

From thee we got an Uber to take us back to downtown New Bern for dinner at Captain Ratty’s.  Although we were not originally planning to eat here, when Denise learned it was owned by the Aunt and Uncle of one of her Marathonfest running buddies, we knew we had to go.  We had a chance to meet Debra and eat a terrific meal with great service.  We then walked back the boat and got it ready for tomorrow’s departure, stowing all that was not necessary as we had an early departure and a long day planned. 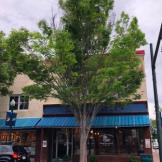 With Debra at Captain Ratty’s 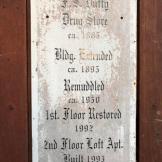 Sculpture appears to be a big thing here in New Bern. In addition to the decorative bears that are all throughout town, there are lots of other pieces of art. Here are some other photos: 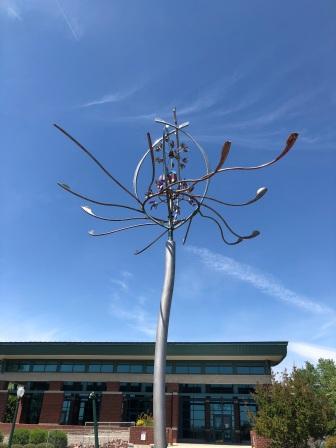 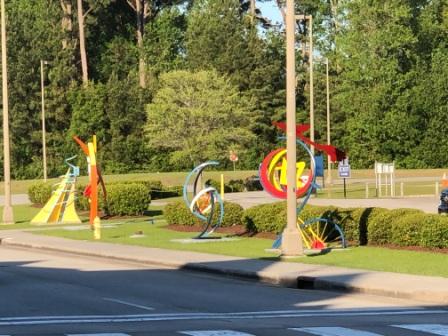