Back in the USA!

Eastport, ME – USA – Tuesday, 8/20
We were so excited when we woke up and found that the fog was lifting and it was going to be a beautiful day. It was low tide in St. Andrews and we could see so much of the rocky shoreline that was completely under water. We were so happy that it was clear as we were able to see all the things we missed yesterday. 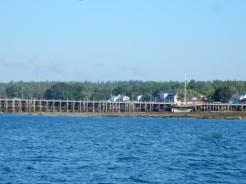 We left St. Andrews and made the short passage to Eastport, leaving so we could time our passage through an area called the Old Sow where several bodies of water, combined with the high tides and rushing current can make for what is known as the world’s largest whirlpool.  We were also trying to time our arrival in Eastport in time for Denise to make a conference call with a client; this is the logistics of our life aboard our Island Office.

We cruised past fisheries in Passamaquoddy Bay, houses on Deer Island, NB, and the town of Pleasant Point, Maine.  Along the way we saw some of the most spectacular scenery and a handful of other small islands.  We also entered US territorial waters and were back in the USA!

Salmon fisheries on the Passamaquoddy Bay 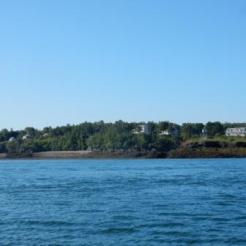 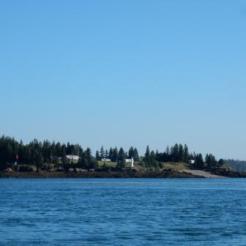 Eastport is on Moose Island, and we arrived to the small and very crowded town float. But, Captain Mark was able to negotiate dockage around two lobster boats, a few pleasure boats, and the town ferry.  We tied up successfully and even had some time to spare before the conference call, but still had to clear US Customs & Border Patrol.

Thanks to technology we were able to utilize the new ROAM (Reporting Offsite Arrival-Mobile) system.  This is where you pre register your information (name, passport ID, Global Entry #, Vessel info, etc.) into their system before leaving the USA, so when you return they already have the information on file. Once inside USA territory, you report your arrival using a phone, and then when they call you back you utilize the video on your smartphone to verify passport and identities. You also confirm that you have nothing to report.  It was so easy and we were cleared in no time at all.  It actually took us longer to get a cell signal as Eastport is in a very isolated part of “Downeast Maine”.  More on this later.

Eastport is a lobsterman’s town and all the city dockage is for their boats, a charter boat, or the ferry boat. Inside the breakwater formed by the wharf is strictly commercial fisherman (and the USCG and CBP boats). This wharf is fairly new and was built a few years ago when the old one collapsed.  Outside the breakwater and on the western shore of the wharf are the public floats. It has very limited space for pleasure craft and the floats available are without any services (water, electricity, fuel, etc.). However, they still charge a rate equal to that of many other places in Maine that offer so much more.  Needless to say, we were glad we were only staying one night.

Inside breakwater wharf – commercial boats only

After securing the boat, Denise’s conference call, and cleared through US customs, we checked into the marina office. 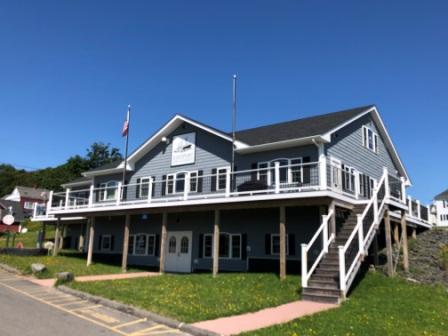 We then went for a short walk to explore the town and grab lunch at a place that came highly recommended: Quoddy Bay Lobster.  It is at the east end of downtown (not a long walk) and we arrived just before the lunch rush so we didn’t have to wait long to place our order.  Because it was such a nice day and we had an awesome view of Campobello Island to the north, we sat outside on the picnic tables and devoured the most delicious lobster rolls.  This place has apparently been “discovered” and the place filled up fast; we could have sold our seats. 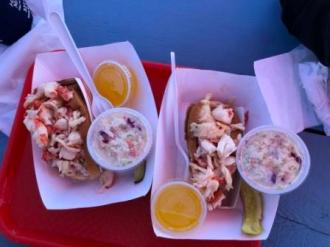 After lunch we walked through some of the downtown shops that were open. Several buildings were undergoing renovation and many businesses looked like they had either closed or were preparing to open anew. 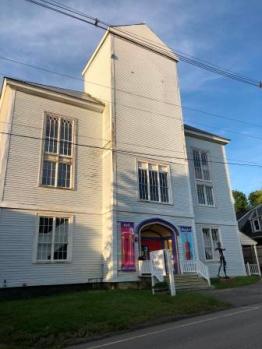 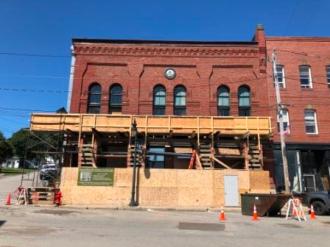 Our mission however, was to go to the retail store for Raye’s Mustard. We had heard of this mustard from some cruisers in St. Peter, NS who live in Eastport.  The claim to fame of this now national brand is that it does not require refrigeration after opening.  The manufacturing plant (Raye’s Mustard Mill & Museum) is located about ½ mile from the downtown and we wanted to go there (imagine that), but we learned they were in a maintenance shut-down and renovation: they are expanding operations and want to keep it all in Eastport.  The retail store at the plant has been relocated to the downtown area during the renovation, which afforded it more room to offer “tastings” of their many flavors. Naturally, we had to sample these and we got to spend some time talking with the women in the shop.  We also got to meet “Karen” who is a “Raye” fourth-generation family member and is one of the owners of the business. It was lots of fun and we made a few purchases to add to our pantry. You can learn more about this place here.

After our downtown adventure, we walked to the IGA (grocery store). We wanted to buy more gin (without import implications and cheaper), and to get a few provisions of brands and items we could not get in Canada.  The walk took us up a hill along the main road out of town, but it is mostly residential. We passed a few churches, the arts center, and discovered the Raye’s Mustard Mill & Museum were directly across the street from the IGA. 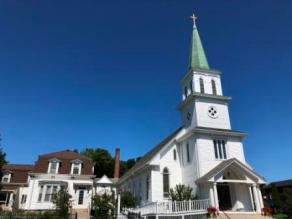 After finding what we wanted, we walked back to the boat and stowed our purchases. Once back on the boat, we worked as much as possible on emails, cataloging pictures, communicating with business associates, etc. until the computer batteries required recharging, which meant running the generator. Not wanting to run to turn the generator on for a few more hours, we took a break and did other things. Mark spent some time talking with the ferry boat captain and at one point he even offered the use of his car should we need anything.

We have a business associate who actually has a house in Eastport, and is usually here in the summer. However, despite our best efforts to connect, he had to go back to Ohio (company offices are there) and we missed each other by just one day.  He had recommended we go to the Chowder House for dinner. It was a short walk to the western part of town, and we had a pretty good meal of fish and chowder (naturally).

Afterwards, we continued our walk up Water Street and found our associates house; it was fairly easy as he was flying an OSU flag on the flag staff.  It is a beautiful place and has an awesome water view. 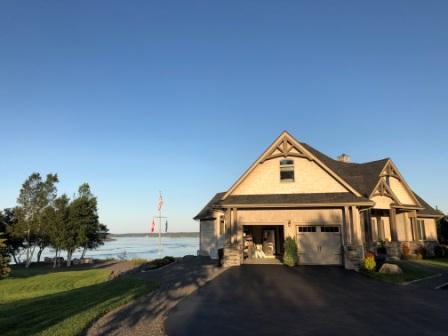 One of the places we had considered visiting while still in Canada was Campobello Island. It sits less than 20 miles east of St. Andrews, NB, and 1.5 miles north of Eastport but still in Canadian waters. It is famous because President Franklin Delano Roosevelt had a summer home here, and is a unique place as it houses an International Park; maintained partly by the USA and partly by the Canadian National Park Services.  In doing research we determined it would be difficult for us to go in our boat as there is no real place to anchor and dinghy to shore, nor are there any marinas for pleasure boats.  Additionally, getting around the island is difficult without a vehicle, and that is why most people who visit do so via a car ferry.  Once we were able to see just how big this island really was, we knew we made the right decision. This place will have to be added to our ever increasing list to visit by car someday. 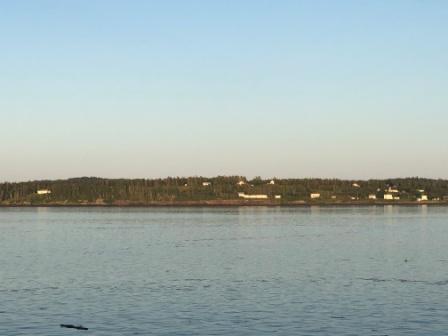 About the cell coverage in Eastport:  Because the Canadian border is so close, and because the area is very rural and remote, the cell coverage is screwy.  Our phones showed that we were on Atlantic Time, even though Eastport is in the Eastern Time zone, and the coverage still showed International roaming. Fortunately, the AT&T plan we have for our phones includes Canada, so international roaming charges do not apply. However we were told by some locals that people arrive here and end up with huge roaming charges on their bill because of this phenomena that the cell phone companies can’t seem to get corrected. Strangely, we had plenty of coverage, unless we were sitting on our boat during low tide and the wharf 25’ above us interfered with the signal.

It was a short, but fun day in Eastport and we are glad we came here. Tomorrow we will cruise in what truly is “Downeast Maine” territory.  In the direction we are headed we call it going “Up West”.

Here are some other pictures from our stay in Eastport: 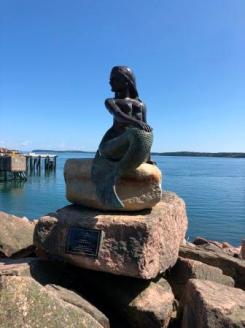 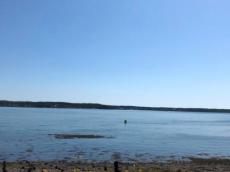 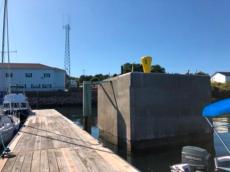 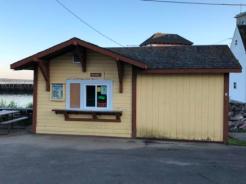 Stay tuned for more of our adventures on Island Office

One response to “Back in the USA!”