Posted on November 2, 2019 | Comments Off on Sole Sisters Sabbatical!

Poquoson, VA/Washington DC – Saturday 10/26
It was just after 8:30 am when Denise left the Whitehouse Cove marina to drive up and meet her running buddies (aka “Sole Sisters”) in Washington DC. Mark would be staying put and enjoying time in his (temporary) “floating man cave”.

Although there are more direct routes from Poquoson to Washington DC, Denise’s travels would take her on a circuitous route through the backroads of Virginia, as she had an errand to complete while on her way; the large orange fender balls had to be returned to Jon & Lynn (“Zendo”).  Their boat was located at Olverson’s Lodge Creek marina in a rural community off the Potomac River, and we did not want to lose an entire day to go there and back by boat. Driving from Poquoson was the fastest path and it made more sense for Denise to do this on her way to DC.  Plus, she wanted these off the boat as they hog up space especially since one of them cannot be deflated. 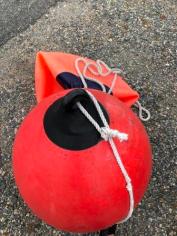 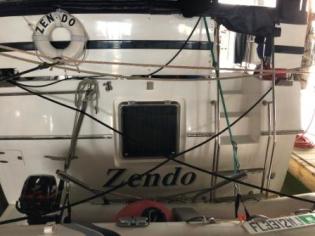 Fenders in dinghy of Zendo

Once the fenders were stowed in their dinghy as instructed, Denise was back on the road for another 2 hours.  A trip that should have taken just under 3 hours, ended up taking 4.5 hours. In addition to the stop at Olverson’s, there was a short stop for lunch in Maryland before entering into DC.

Before the hotel, Denise had to go pick up her race bib at the expo, located in the Gaylord Convention Center at Grand Harbor. The place was a madhouse and after pick up of the bib, shirt and a short walk around, she left.  It took another 30 minutes to get to the Hyatt Hotel on Capitol Hill, where most of the other girls were staying. Once at the hotel, Denise checked into her room and then caught up with her “Sole Sisters” in the shared suite that several had booked for the weekend. 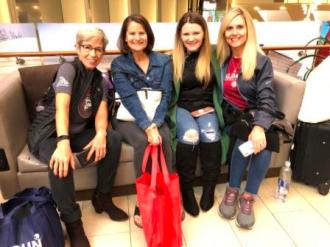 That evening, a casual pre-race dinner was hosted by Teresea, sister of running buddy Susan S, who lives in Arlington. She cooked up a race-friendly meal that was delicious. Although she lives away from us, she usually joins us on our runs when visiting her twin, and we have had her onboard Island Office when we were in DC in 2017. It was a fun affair and everyone enjoyed talking and sharing what was going on in their lives, comparing notes, and discussing potential future races together.  We headed back to our hotel in DC and wished each other good luck for tomorrow’s race. 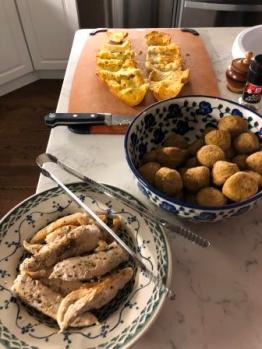 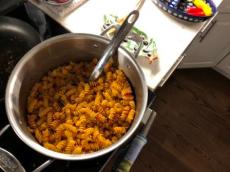 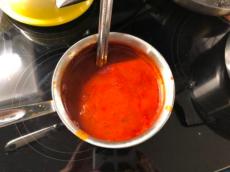 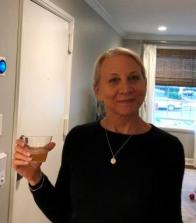 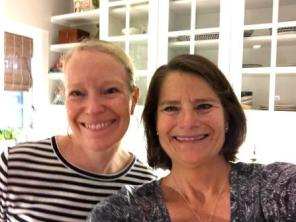 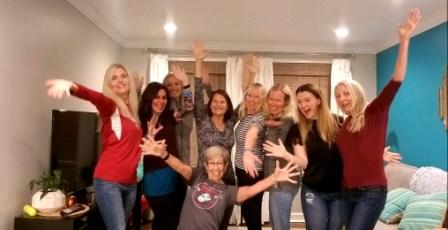 Meanwhile, Mark spent the day doing boat chores (new engine zincs, sump pump clean-out).  He found an Italian restaurant (Mama Mia’s) and ordered his usual chicken parmesan. Naturally, he had to try their garlic knots, and naturally, none have compared to those back home at Antonella’s!

Poquoson, VA/Washington DC – Sunday 10/27
As forecasted, it rained during the night and it was threatening to rain as the Sole Sister’s made their way to the starting line(s).  As the marathon started in a different location than the 10k, we were not all together but we were with Victoria and Melissa in spirit. Running the 10K with Denise were Aileen, Lisa, Susan M, and Doreen.  Susan S and her sister Teresea had completed a half-ironman race the previous weekend and were the transportation & support crew for the day. 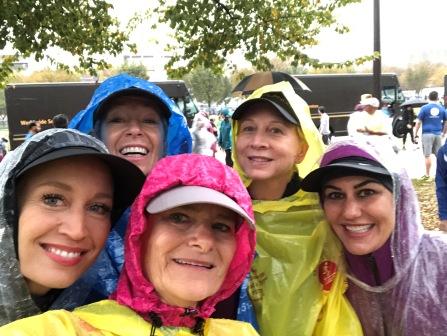 It started to rain as we were waiting for the race, then it stopped for a while.  But after the start, it rained off and on, (mostly off) but poured just after Denise finished. 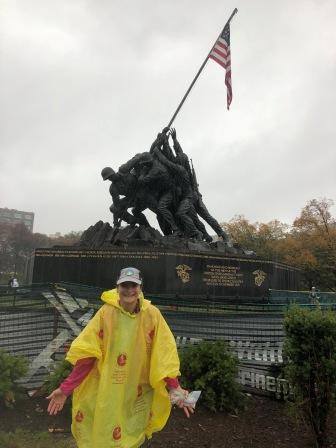 The walk after the finish is a long path, especially when it is raining and the other 10k-ers were ahead of Denise.  Eventually, she was able to meet up with them and all decided to go back and get cleaned up.  We knew it would be hours before Victoria and Melissa would be finishing and we needed to get into dry clothes.

Once cleaned up and after eating some food, we then were able to be there for Victoria and Melissa after the Marathon finishers shoot. It had stopped raining, the clouds cleared up, and in fact it got hot!  We spent some time celebrating with them, then crammed into a cab to go back to the hotel. 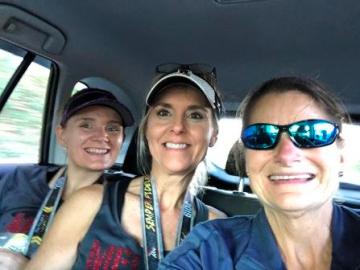 Crammed into a cab

Since it was Sunday, the three Catholics in the group (Lisa, Aileen and Denise) still had to get to mass.  Through previous research, St. Peter’s (Capitol Hill area) had been selected as they have a 5 pm Sunday mass, which fit perfectly with our weekend plans. 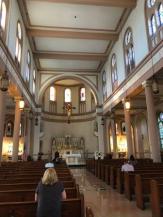 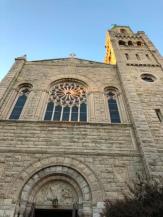 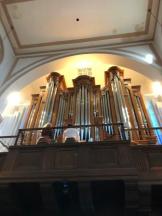 Our final group event for the weekend was a dinner at the Capitol Grill.  Aileen had made reservations and we had a great meal celebrating each other and our many years of friendship. We celebrated our most recent accomplishments and the many miles we have all run (or run, biked & swam) together.   All of us are marathoners, half marathoners and runners, and some of accomplished more than others. But we are all “Sole Sisters”, and this trip was good for Denise’s soul.  In the morning, we would be all going our separate ways, but will be back together to enjoy future events together. 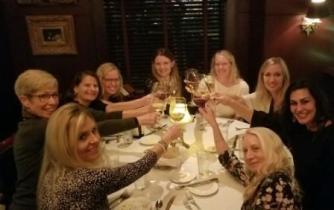 Meanwhile back in Poquoson, Mark attended St. Kateri Tekakwitha Catholic Church (no pictures); a place we went to in 2015.  In the afternoon Mark went to the movies and saw “Angel Has Fallen” and started a new book “Lethal Agent”; the latest in the Mitch Rapp series (started by Vince Flynn).

Poquoson, VA – Monday 10/28
Denise was wide awake very early so she decided to get on the road sooner than planned. She figured since she was awake she might get ahead of the DC traffic.  She checked out of the hotel, and while waiting on the car to be brought up from the valet, ran into Aileen who had an early flight out. After a short chat and hugs, both said goodbye and were on their way.

Taking the direct route back to Poquoson was almost all interstate, and fortunately it was in the opposite direction of the usual rush-hour traffic.  Northbound was a nightmare, but southbound on I-95 was not bad and in 2.5 hours Denise made her way back to the boat.  Earlier than expected, but we were grateful as we had a lot to do before the 2:00 pm deadline to return the rental cars.  We also had to allow time to prep the boat for an early departure tomorrow morning.

First we returned one of the rental cars, then went to Stein Mart to return a jacket purchased last Friday, but not needed (nor wanted).  Then we stopped at Kroger in order to get groceries for the boat, and had to take them back to the boat and get them stowed.

Meanwhile, we had been in touch with John & Cathy, who were also on a tight schedule for the day, coordinating grandkids activities with their own.  But they managed to carve out time for a late lunch.  We met at Longhorn Steakhouse and enjoyed one last meal and a beer together before our final goodbye.  We have so loved being able to see them twice this year and hope we can visit again soon.

We dropped the rental off at Enterprise and got a ride back to the marina.  We then spent the rest of the afternoon and evening getting the boat ready to leave. Mark took care of a pump-out; made easy by the fact that the hose could reach and we didn’t have to move the boat to do this. We had a quiet dinner of leftovers from the freezer and watched the last episode of season 3 of “Victoria”.  We will now be ready to watch season 4 when Masterpiece Theater airs it in spring of 2020.

Tomorrow we will leave Poquoson with hopes of getting past Coinjock and hopefully to an anchorage on the North River, just before crossing the Albemarle Sound.  It all depends on the bridges and timing for the bridges and the Great Bridge Lock.  We also have to stop for diesel along the way at Top Rack Marina, where it is always considerably less than others and where we almost always fuel up.

Stay tuned for more of our adventures on Island Office

This entry was posted in Down East Loop and tagged Chesapeake Bay, MCM 2019, Poquoson 2, Washington DC. Bookmark the permalink.